What else ?!
- You can now set a volume for playing audio files.
- Fixed the JDK issue where users which had the JDK installed could not run Touch Portal anymore.
- Added press duration for for Key Press actions.
- Changed the initial state of ON / OFF buttons. You can set them for each button separately. Just choose what the initial state should be for the button in the button settings.
- When importing a page that already exists, Touch Portal will now auto-rename the page.

Bugfixes and improvements:
- For free user the information box did not popup anymore, fixed that
- Fixed several OBS related bugs
- Made Touch Portal a bit smarter in regard of communication.
- We renamed a few things to make the app a bit more easy for our users.
- Fixed a bug where StreamLabs OBS events were triggering even when not met the criteria 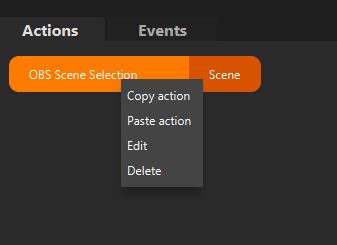 We have added a lot of new features in release version 1.8 for windows and mac OS. Here is the list of all changes.

USB Connection
We have added USB connection to Touch Portal for Windows and Android. For our users who cannot connect using WiFi because they are on a secure network or something like that we now have a solution.

For this to work, you need to turn on ADB-Debugging on your Android phone. You can do this with the following steps:

Just be sure to switch to wifi if you do not want to use the usb connection anymore.

Button Events
We have added events to buttons. From this moment buttons can act when an event happens. Events such as start-streaming or new-follower. Just set the event in the events list and every action put below it will be triggered when the event happens.

With this release the system is there but we do not have many events yet, but you have to start somewhere. In future releases we can easily add new events for all sorts of systems and applications! We have added the following events in this release:

New Action - Change button visuals action
You can now add an action that will change, when run, the visuals of the button you have added the action too. This is an important part of the toggle buttons. You can find the action in the new category called "visuals".

New Action - Set Button state
Buttons now have state. You can change the state of a button with this new action. Currently we only allow the state to be set to ON or OFF. In the future we will improve on this to also allow to set a number value. This will then allow for things like multi tap. But that is for the future, for now just ON and OFF.

What else ?!
From now on, when you press a button, the handling of that button will be done asynchronous. This means that you can press multiple buttons without them having to wait for the previous button pressed was completed. Because of the async actions we have widened the limits of a timer action . You can now set the timer from 100 milliseconds to 24 hours. But there is more, from now on you can drag the action to a position instead of swapping it with the action you dragged to. A special grey line will be shown where the action will be placed. To create pages faster and more precise we have also added the feature to copy and paste buttons. But sometimes you just want the same look and feel so we added a copy and paste button style as well. Just right click on the button and select the action you want to do. We also changed the default ports because our previous port was a port that was used by quite a few other software packages.

Bugfixes
And of course we have fixed some bugs:

Touch Portal 1.7 is out with TWITTER and TWITCH INTEGRATION!