We did the following on this new version:

Here is what we added in the 2.2 version
Low Level Key presses (Windows only)

In previous versions, Touch Portal used virtual keys for their key pressing system. This works fine for most applications but it has it disadvantages. From this version we added a low level key press system that mimics keyboard presses a lot better. This has the following advantages: 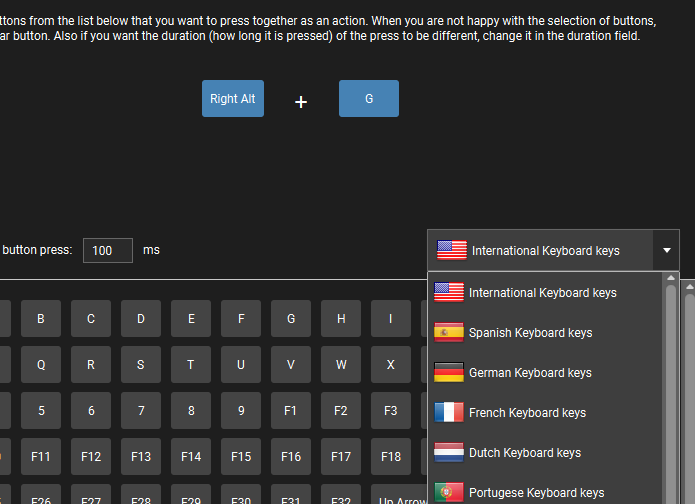 In this version you can also select multiple keyboard layouts to access the keyboard specific keys. We have keyboard layouts from a lot of countries available such as French, Spanish, Dutch, Portugese, German, Danish, Finnish, Swedish, Norwegian, Italian, Canadian-French and Belgium.

On Hold Button support
You can now add functionality when holding a button on your page. You can use this for example with push-to-talk functionality or volume control. You can set a selection of actions to the behaviour and you can also make the button change visuals during the hold. 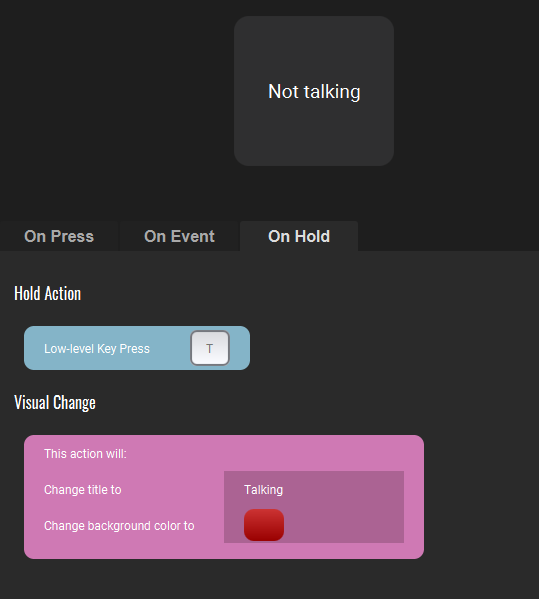 You can only use actions that make sense to use for an on hold functionality such as keys, volume changes and that sort of actions. Touch Portal filters the available actions for you in the action list.

File input / Output actions
This version of Touch Portal will have a lot of file handling support.

Writing to file
You can now write to a specific file. You can write any value and you can also write custom states, dynamic text and plugin states to a file. Writing to a file clears the file and will only contain the specified text after using the action.

Append to file
While the write action will overwrite everything in the file this action will append the given text to the end of the file. Also with the options to add custom states, dynamic texts and plugin states.

Delete file
This action will delete the give file. The file will be deleted from disc.

Listening to file changes
We have added an event that will keep track of when a specific file is changed. With this you can listen to a file which is being changed from a third party piece of software and when it is changed, Touch Portal triggers and allows you to act on this event. In combination with the new file IO actions you can use this value in any way you like in Touch Portal.

IF File logic function
You can now also create IF statements with file operations such as; does the file exist, is the content equal to a given value or does it contains a specific value.

8-bit PNG support
The icons from Nerd Or Die are very popular but unfortunately they make those icons in 8-bit. Touch Portal did not properly support 8-bit icons before but from this version you can load up 8-bit icons without any issue. No more converting those nice icons to be able to use them in Touch Portal!

Open files
With the previous versions you were already able to open applications and start scripts but opening a normal file was not possible. In this version you can by using the OS to open every (by the OS supported) file. So you want a button to open a specific PDF document? you can! You want to open your graphics file? You can!

Dynamic text functionality extended
We have taken the time to add the ability to add custom states, plug-in states and Touch Portal dynamic text object to a lot of actions. You can use them with our new file io actions but also with Twitch, Twitter, HTTP, Write Texts, Open Url and much more.

Multi-select actions
We have added a multi select system for actions in your action list. You can select these actions and copy paste them. Press the Ctrl key while left clicking on the actions you want to select.

Gradient background color direction
From this version you can change the background color gradient direction. We have included the horizontal and diagonal option in addition to the vertical option which was standard in the previous versions.

New Logic functions
We have extended the logic section this version to allow for even more complex but powerful macro buttons!

Increment Custom state value
You can now increment a custom state value with the given value. The custom value needs to be a integer number. This new action allows you to add number logic in your states and flows. You could for example make a multi-option press button. Each time you press the button it will increment the state by 1 and then execute a different action on each value.

Randomize Custom state value
You can now set a custom state to a random value within a range.

IF equal, not equal, higher than, lower than
You can now check if a custom state is equal, higher, lower or not equal to a specific number value

Managing backups
In the previous version we introduced a quick integration of making backups of your Touch Portal setup to ensure that certain Windows updates did not remove everything, leaving you with nothing. The downside was that you needed to restore the backup manually and it was not clear where they went. This version we have added a backups section in the settings screen:

This will show you the list of backups and you can manage them.

On this screen you can manage your plug-ins. But this is not all we have changed or added:

New OBS features
Again in this new update we serve our OBS users. This time with some nice additions.

New actions
Improved actions
Performance boost & improvements!
Updated visuals
This version we have again upgraded and fixed some visuals in our app
What else ?!
Bugfixes
And of course we have fixed some bugs: