Does streaming and recording at the same time use more CPU when using NVENC?

Recording and streaming requires 2X the work. UNLESS you use the same settings for Recording as using for streaming (ie creating one video stream, and recording that). I for example, don't do that as my stream provider doesn't accept input at as higher resolution as is my camera/environment. So I stream at a lower resolution, and record at native (higher) resolution. And that is extra workload for CPU and NVENC

The whole point of using NVENC is to offload some of the computationally demanding real-time video encoding to dedicated purpose designed circuits on GPU, thereby reducing workload on CPU. So, by definition for a given workload, if you are using NVENC, then CPU workload will be lower than not using NVENC. Now, with that said, once you've off-loaded certain workload to NVENC, the CPU is free to do other stuff...
- some don't have enough CPU to both, say gameplay, and use OBS to stream/record
- Others, once they have OBS working with their other workloads, start getting fancier by adding CPU workloads by using other OBS filters and effects (like Audio filters, or chromakeying, or any number of other options, or plug-ins which use CPU). And some items use more CPU than others.

What we don't have, in OBS Stats, is a way to identifying BOTH OBS main process, and any associated processes (like NDI, or plugins, etc) and combine that to see an overall OBS resource impact on PC. For example, on my system, showing OBS stats, eh OBS CPU indicator in 1-2%. Though technically accurate, it is also meaningless to me as that amount is NOT reflective of the overall system CPU impact of OBS and associated components (which will vary per system, not something simple to program to display)

Hopefully, I answered you question. If not please be clearer in your question

thank you for your answers @Lawrence_SoCal and @koala
from @Lawrence_SoCal answer, I didn't understand that @koala's second point was possible.
I want to minimize CPU usage while having the best output for my stream and my recording. (I don't have a fancy PC but I have a good GPU)
Do my current settings makes @koala's second point possible or do I have to play with the advance mode to achieve this? 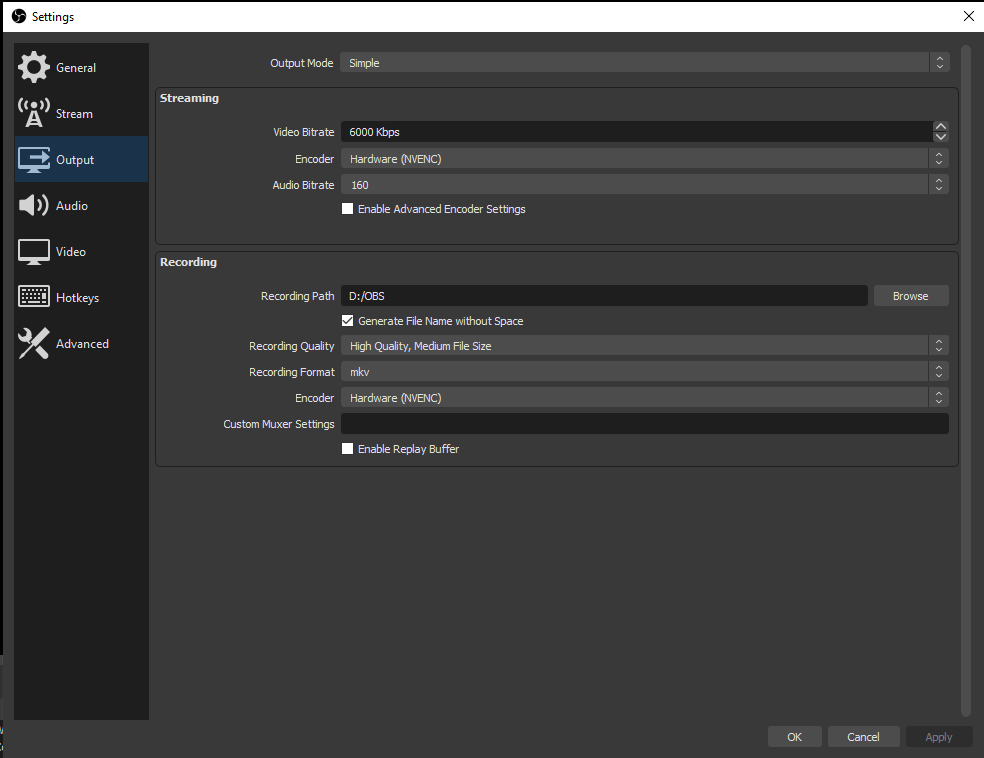 Yes, exactly this setup is my second point. This is a recommended setup to get better quality for recording than for streaming while at the same time not requiring more CPU power. This will run 2 encodings running parallel on the GPU, one with streaming settings and one with recording settings. Since Nvenc is a dedicated circuit on the GPU, this will also not require more GPU resources - it's perfect.
M

koala said:
Yes, exactly this setup is my second point. This is a recommended setup to get better quality for recording than for streaming while at the same time not requiring more CPU power. This will run 2 encodings running parallel on the GPU, one with streaming settings and one with recording settings. Since Nvenc is a dedicated circuit on the GPU, this will also not require more GPU resources - it's perfect.
Click to expand...

Hello, I have been using these settings to record and stream; however, I would like to record without my stream music, which I can only seem to do in advanced settings. Other output settings in advanced settings are quite different and, while I've played around with them, I can't seem to record as high quality or avoid jumpiness in the stream as when I use the simple settings. I also put a much higher load on my CPU whenever I try to use the advanced settings. Is there a way I can make changes to audio while keeping video settings?
You must log in or register to reply here.
Share:
Reddit Pinterest Tumblr WhatsApp Email Share Link
Top