Recording has stutters, I am recording on a high end PC. I tried everything I could but it wont go away. Please help :(

I'll get straight to the point. After recording a video in OBS, the recording always has stutters/freezes. I don't experience any framedrops in-game.

What I have tried so far:
1. I played around with the bitrate of the recording, I thought that maybe it was too high causing writing problems (40000Kbps). But lowering this number did not help.
2. Running OBS as an administrator, and setting process priority on high. Does not help.
3. I disabled the windows game function and game bar, some say that these settings prioritize games over OBS, hence the stutters.
4. Look-ahead and Psycho Visual Tuning are disabled.
5. I tried CBR, VBR and CQP. None get rid of the issue.
6. I put the preset option on quality, as max quality forces 2 pass rendering.
7. I tried both .MP4 and .MKV but there is no difference in stutters.
8. I cap my in game fps to 144 or 120 (depends on if the game is very demanding) but this does not help.
9. I have tried other recording software aswell, and the problem also occurs.


I am starting to believe that this is an issue from my computer itself rather than OBS. Reason being, even while recording Brawlhalla, the stutters are in the recording. So it is almost impossible that Brawlhalla is fully utilizing my GPU and CPU when its a 2d platform fighter default capped at 60 fps. 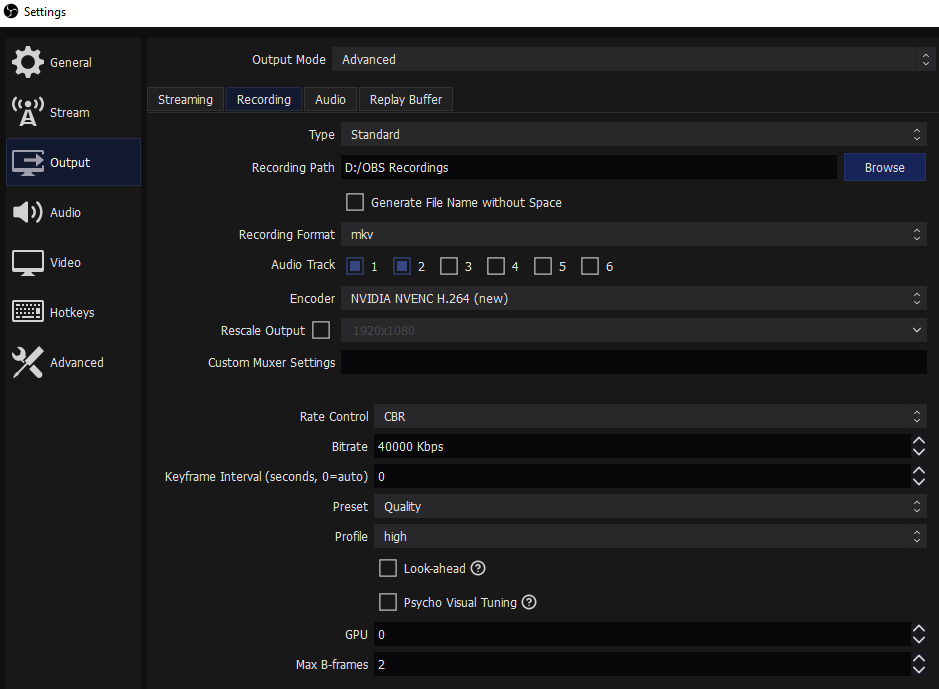 If anyone could help me out I would greatly appreciate it, I have no idea what to do at this point.

Restart OBS and perform a test stream/recording of no less than 30 seconds doing as you normally do, including playing games, full camera or whatever you normally do.
Look in Help menu. Upload the current log file and paste the url to the log in here. Click on the Analize button to start troubleshooting common issues.
J

I'm not sure how to create an url to the log so here is the txt file. What stood out to me was that 0.3% of the frames were lost, but to me the recording looks very choppy. I am going to render the video and upload it to youtube to see if the stutters are still there, There is a slight chance that I am just psyching myself out because I expected it to look smoother? I play on 240hz and maybe 60fps videos just look choppy to me.

You have 2 monitors, one with 240 fps and one with 60 fps. It it said, that Windows has stutter issues of its own with such a setup. Your setup with OBS looks good. Try a different video player, for example VLC or Media Player Classic and see if it is actually not choppy with these - the internal Windows playback function is not ideal, especially at the high bitrates you configured.

A better configuration for recording would be to use CQP instead of CBR as rate control and configure quality instead of bitrate. This variable bitrate mode will make better use of disk space. A quality (CQ level) value of about 18 produces footage indistinguishable from the original. Higher values mean lower quality and lower file sizes. However, using a different rate control will not change performance behavior/requirements.
F

As soon as I read the title, I was immediately thinking number 8 on your list aka. an uncapped game fps.
To my surprise thou you have it capped, however... you have it capped at 120 or 144.. which is ridiculously high for recording, unless you're playing something that is absolutely not resource intensive. (some old counter strike maybe?)
Do you realistically not expect your fps to ever drop below 120 on the games you're playing? because the reason it would drop below typically involves maxing out resources.

And yes sadly even with old games the issue is present... why? Because old games are not 64 bit usually and they only run on 2 CPU cores.. if they hit a ceiling on those cores alone, it's impossible to pre-fetch the new frames for the encoder so it would end up encoding the same frame over and over again till your core usage dips below 100% (ryzens with low per core frequency are especially susceptible to that)
I usually cap 32 bit games at 60 fps and 64 bit ones that I know will run well and utilize multiple cores properly at 90 for recording / streaming (ryzen 3800x at 4.2 Ghz / RTX 2080)

Other than this though, the only other thing I could think about is maybe some other software on your computer or a slightly unstable overclock that otherwise goes unnoticed (especially on your memory modules) interfering. Maybe you need to bump up your SOC voltage a tiny bit. (obviously research that stuff first)

Sorry for not updating the thread in a couple days. In the meanwhile I have tried a lot of things, but nothing seems to work.
I have uploaded the latest log: (https://obsproject.com/logs/ngqPDl7380p5DOsf) along with the raw OBS file uploaded to youtube: (https://www.youtube.com/watch?v=D8kDQRhgyV0). I know the quality isn't the best, but I wanted to see what a raw OBS file would look like, and as you can see there are stutters almost every 2-3 seconds.

I am really convinced at this point that this is a problem inside my computer and not the OBS software, but I have no idea how to find out what it would be. I do not want to give up trying to record, but my situation is making it almost impossible to stay optimistic.

If any of you guys could find something in the logs, or know any tips to troubleshoot the computer itself. I would greatly appreciate it.


For now I have stopped trying to fix the problem because it has already drained too much of my free time, I'm looking forward for responses.
R

Solid advice from koala & fsimon but according to your log, you appear to be ignoring both of them...
J

I have tried everything that has been suggested in this thread. It has been over a week since i tried everything, hence the different settings. I did koala's solution which did not work, and I also read fsimon's solution. But I dont have an overclocked pc. My settings have changed since the 12th of may because Im trying to find the problem.

I also unplugged my second monitor (60Hz) to see if it made any difference. But unfortunately it was the same result.
R

Recording VBR @ 50Mbps. Rust or SSD? Is it full or getting close to full? Looks like your HD could be the issue. Record to an SSD with plenty of available space.
R

I am going to try and fix the encoding lag for a bit. I am recording to my M.2 SSD but I gave a seperate part of it 300GB just for video footage of which 260GB is currently free.

I'll update the thread when I get results.
R

Plenty of space, as long as it's not 4TB or larger.

In your first post you mention a Samsung EVO. Do you have Magician installed? Keep an eye on temps, could be overheating after some time & getting throttled or just starting to fail.

Encoding lag was worse in your second log & since you were recording at a higher bit-rate than in the first log you posted, I think it's worthwhile too make sure that SSD is up to the task.
Last edited: May 24, 2022
J

I did not know what magician was, but I have downloaded it and did a performance benchmark. To me it looks like it should be able to handle 50mb/s with ease.

Some good news: I toned down the bitrate from 50mb/s to 20mb/s and the stutters are almost completely gone. But the quality of the footage is in my opinion not good enough. I'm going to slowly increase the bitrate to see if I can find good quality without stutters, I'll keep you updated.
R

That test only lasts like 2 minutes, not enough time. When you're recording, it's constantly accessing & writing to the drive. If that thing is getting over 60c, it's too hot.
J

Just figured out that anything above 20mb/s results in stuttering footage. With the magician running for a 10minute recording the temperature does not exceed 52c. Not sure how to increase or fix the write speed of the ssd cause it seems to work fine.
R

Is the drive being Trimmed on a regular schedule?

Check Magician, see if there is a Firmware Update for the drive.

Not sure what it means, but here's the result of the extended smart test. 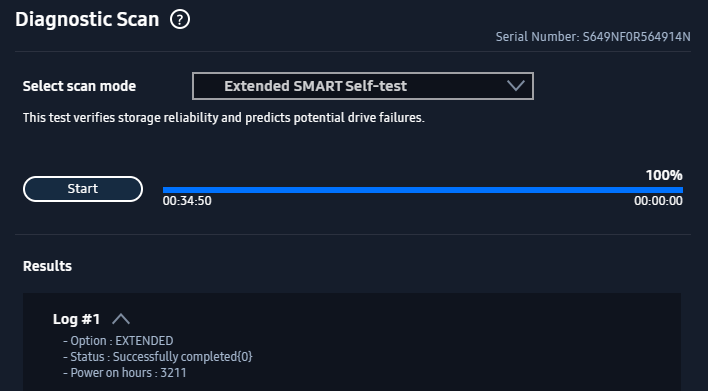 Is TRIM enabled & Firmware updated to the latest version?

What Model is it? How many TB's have been written to the drive, this info should be available on the Drive Dashboard in Magician.

After only 3211 power on hours it's impossible the drive has exceeded its supposed maximum number of write cycles. You're probably sending the OP on a fool's errand.

According to the "profiler results" epilog in the last log log, the only entry that indicates processing of one frame exceeds the maximum frame time (16.66 ms with 60 fps) is this entry labeled "tick_sources":

Code:
As far as I know, tick_sources is the part of OBS that reads all sources. Since you only have 2 sources, one game source and one monitor capture source, it's not much choice which one can be the culprit: remove the one you don't use and see what you will get with the other one left. It's also not recommended to have both monitor capture sources as well as game capture sources at the same time in OBS. They might stomp on each other, especially if the game they're capturing is running in true fullscreen mode.
As far as I see, this can also be a sign of having the game rendering with unlimited fps, so there is no resource left for OBS. However, if you actually did limit the fps, this should not be the case.
R

TB written information is displayed right in Magician, it's not like it's hard to find.

I didn't even look at the Sources since you had already gone over the log but good catch, although I still think something is up with the drive. 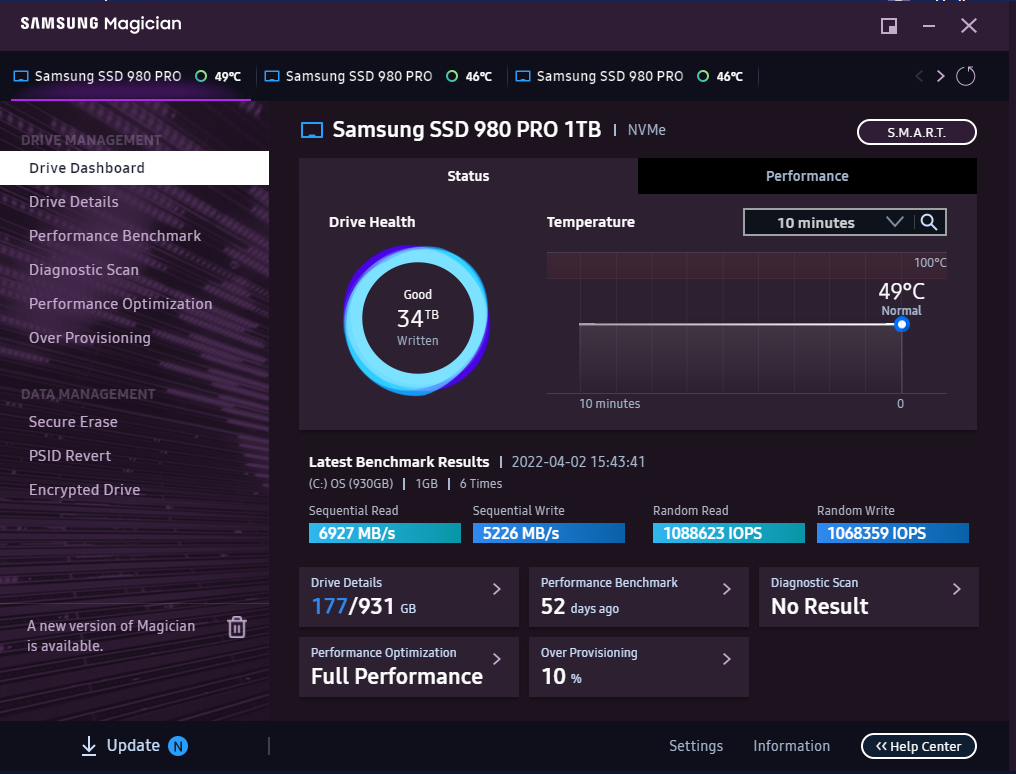