Hello,
I have been streaming at 720p/60fps on my gaming PC (i7, 1080, 16GB RAM) for some time now, and have started to encounter what I feel is a series of cascading and compounding issues with my games, OBS, and my PC all freezing. However, several months ago, I've been slowly having growing issues with encoder overloading, stream and game stuttering, the occasional freeze, etc. Today was by far the worst of it where my whole PC completely locked up. I could not move my mouse around, the stream froze, the game froze, my OBS froze, and the only audio that was playing was the in-game audio, but everything was frozen.

Mind you, this PC is barely 4 years old, and the only changes I've made to it hardware wise was swapping out the old 240GB SATA III SSD for a 1TB EVO 970 NVME M.2 stick drive for the OS C:/ drive (as the SATA was running out of space prior to the change, and I did it with supervision of someone who knows PC's).

I've watched a number of Youtube tutorials on how to optimize OBS and my PC to operate steadily while streaming at 720p/60fps whereas before I was only able to do 720p/30fps (ethernet was the bottleneck). A few things to note here is that when I am streaming, I have the game on Monitor 1, my Twitch dashboard and StreamElements browser tabs open in Microsoft Edge on Monitor 2 with Discord in the background, and Monitor 3 has my OBS window open on it. My OBS itself only has 5 scenes and 1 script (countdown timer), and I have run it through the analyzer. An update or two ago, I noticed that there will be an occasional freeze of whatever it is I'm doing during a stream would force my enabled preview to cut itself in half and "squeeze" the preview (as seen below). To my viewers, the stream is still in 720p/60fps, but my preview is getting compressed heavily in the software interface. I've been told to disable preview until needed which I have done on occasion, but I feel like I should be able to leave preview on to catch things like this happening and it not impact my stream as heavily as it has been? 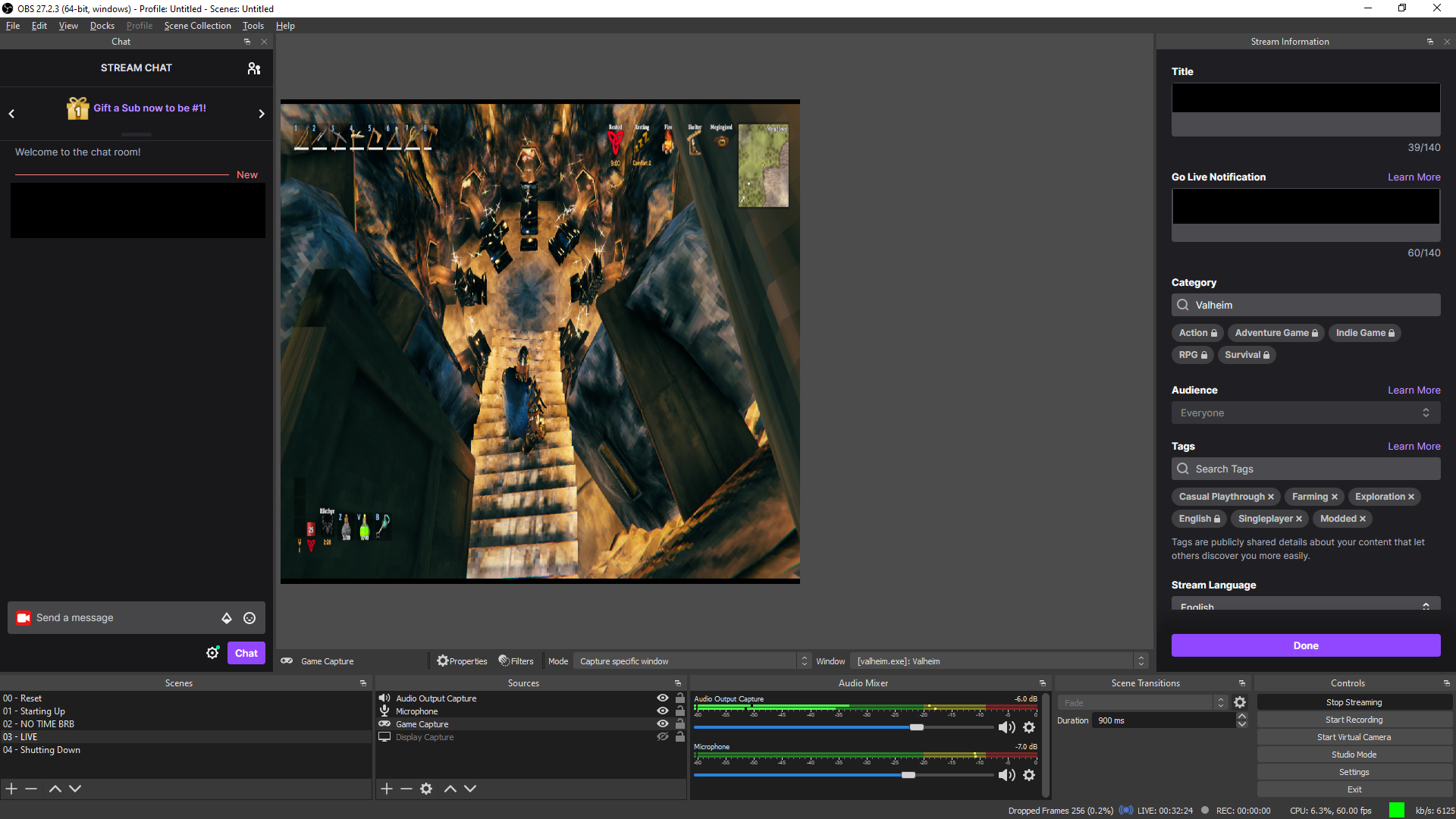 I have my bitrate set to 6000 because I have a 400 / 25 potential speed threshold, and while I have tried to stream with my Nvidia Encoder that's already registered in my OBS's selection, I've found x264 does not throw Encorder Overloaded warnings every several seconds.

I want to gently throw it out there that I'm incredibly computer illiterate and, although I am asking for help here, approach with kindergarten-level terminology and how-to. I'm not good with coding or hardware reading other than what I know that which is available to me in terms of things like what is already in my PC.

I am not sure what more to do. I clean the PC regularly (physically and by running the occasional scan), Task Manager isn't showing any sort of issue when this happens, all components in the PC are new within the last three-and-a-half years, all drivers and other such system software is always kept up to date, and my games are installed on a SATA III SSD with decent data transfer rate (as far as I'm aware). The attached Log File was from today's stream and might include what happened when my whole system froze and forced me to have to manually power off the PC using the 5-second power button hold.

Any insight would be helpful. The only option I have left to me would to be to clean-install my OS (Windows 10) and I'm already apprehensive about doing that!

I'd like to tack a note here that the log was from before I ran OBS through the analyzer, I failed to mention. This log is current as of within the hour.

I am having this exact same problem so hopefully, we can get an answer soon. It has only started happening recently for me, but what happens, in addition, is my video capture devices all shut off and go black and the only way to fix is to restart OBS. I am curious to see what works for you.
You must log in or register to reply here.
Share:
Reddit Pinterest Tumblr WhatsApp Email Share Link
Top