Microstutter and skipped frames in preview and recordings. No encoder or Render Lag.

I have had weird system wide stuttering issues for a long time now, and I've now reached the point that it's beyond what I can search or throw extra money I don't have at the problem to try and solve.

I get random strange stutters, micro stutters, and lagspikes/dropped frames to varying awfulness in various games and apps. But especially in OBS. Even with console games plugged straight into my capture card, any preview of that signal (whether it be through OBS or RE Central) has gross stuttering and dropped frames. Despite switching to the raw passthrough HDMI signal from my capture card, into to the same monitor, looking perfectly smooth 60fps.

Temps are normal, and nothing is even cracking 70% usage anywhere.

I have no problem sharing recordings, screenshots, anything. Just want to get this thing fixed so I can boot up a game or a stream and it finally just works with out flipping through settings for hours every time I install a new game.

Things that stutter:
OBS Preview
Recordings from OBS
RE Central preview and recordings from it(capture card software)
PCSX2
Most tests on TestUFO when OBS or a game is running in the background
Tower Unite
Destroy All Humans Remastered
Dark Souls Remastered
Assassin's Creed III (this may just be a terribly optimized game)
Age of Empires III
Age of Mythology
Minecraft Java and Bedrock (some how gets mostly fixed if I turn on in-game vsync, despite running NCP v-sync and G-Sync)
I can list tons of games, but you get the idea.

Things that don't stutter:
Certain games?
Elden Ring doesn't for the most part
Binding of Isaac (I've gotten to not stutter as far as I can tell after I disabled Fullscreen Optimizations)
TestUFO tests, as long as nothing else is running (doesn't stutter with no other apps running anymore after getting matching 165hz monitors, but it did when one of them was 60hz.)
Most of anything in Chrome
File Explorer/Windows things

G-Sync on or off.
RTSS limiter at 3 below refresh rate, in game's internal limit, and/or 3 below in-game's limit.
NCP framelimiter
DDU clean offline safemode install of GPU drivers
Every Windows power plan
The Ryzen power plans
Running only one monitor
In game framelimiters
Upgrading monitors to matching 165hz G-Sync
Just about every NCP setting
Updating BIOS
Disabling any HDDs connected
Tried both single monitor display mode and multi monitor display mode in Nvidia Inspector
Set all Windows sleep settings to never
All the recommended steps in "Best G-Sync settings" post on Blur Busters
Disabling/Enabling XMP
Enabling/Disabling Resizable BAR
Disabling Fullscreen Optimizations (this is the one thing that has made a difference. This helped with a bunch of games, but a lot of things still stutter)

Things I haven't tried:
Fresh install of windows (I really really don't want to set up all my apps, plugins, templates, and settings again for work)
A non RTX GPU (I had a 2060 in here for awhile and I remember it seemingly having the same issue, but I haven't tested that one in awhile and gave it to an ex-partner.)

I don't know at this point, maybe I got a bad GPU and need to RMA. Maybe the 30 series has an issue? Is my mobo too old for my hardware? CPU bottleneck, even though usage and temps are super low? Don't even know anymore.

Specs:
Ryzen 3600 with a Vetroo V5 air cooler
ASUS TUF Gaming GeForce RTX 3070 Ti 8GB
16gb RAM running in XMP at 3200
EVGA Supernova 750 GT, 80 Plus Gold 750W (GPU power is not daisy-chained, I'm using two separate cable from PSU)
MSI B450 TOMAHAWK MAX mobo
NVME WD Blue 1tb boot drive
a bunch of various SATA SSDs
One 3TB HDD (had the stutter before and since getting this, but tried disabling and it made no difference)

Additional Info:
Both monitors are on DP cable.
Both are MSI 165hz G-Sync

Making a custom resolution in NCP and setting both monitors seem to 120 hz mostly fixe issue of stutter in OBS. But that seems like a pretty crappy fix? I should be able to run my monitors native FPS. Don't want to nerf the monitor at all times to 120 just to fix stutters that shouldn't be there. Will have to test other things at 120hz. Test UFO tests seem to look fine? Youtube seems ok? But will have to test more with that. As well as other games and apps.
T

add new profile, add only one scene, only one source and check results.

This unfortunately makes no difference. The same stutter is in other programs as well. So a different OBS profile would not fix the issue. The same exact stutter is present in AverMedia RECentral, my capture card's software. So it is more widespread than an OBS profile.

Update on this issue. I have now also tested putting my old GTX760 in this machine and it has the same exact stuttering. So I think bad GPU can be ruled out.

I think some of the time what I might be seeing is judder and not stutter? Or maybe both? Frames duplicating in uneven amounts to fit my RR, on top of super low pixel response times having very little blending or blurring of those frames. A lot of shows, movies, and youtube videos seem to have a terrible flickery unsmooth look to them on my system.

Here is an example. The guitar panning shot looks super gross and unnatural. Flickery and choppy and lagging. What I can only guess is very very server judder? But I am not entirely sure. 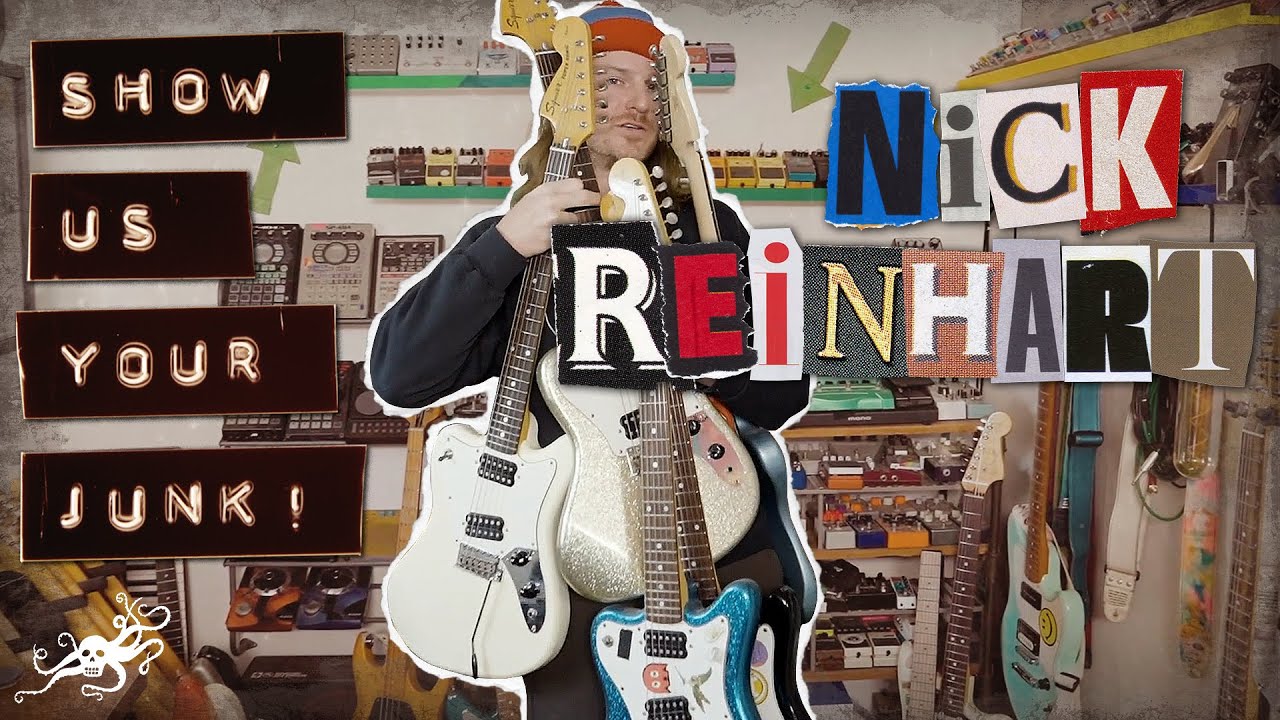 Nick Reinhart delves into his guitars, pedals, and electronic doodads.

However, you'd think it this was the issue, changing my refresh rate in NCP to something goes evenly with the content's fps would fix this issue right? It does not. I've tried pretty much every refresh rate with content that has this issue and none fix it. Doesn't matter if it's 165hz, 144hz, 120hz, or 60hz. All have the same terrible flickery look on panning shots. 120hz should in theory look good with everything because 24fps, 30fps, and 60fps all go into it super evenly. Alas, it is not my golden refresh rate that solves all my problems. I am still once again, at a loss with why everything looks so terribly unsmooth on my system.

I have the exact same issue it started in the beginning of June for me and I have had to deal with it ever since. It dosen't seem to be an obs issue since I tried both shadowplay and obs with the same result. It isn't only recordings as well it is also yt videos and everything with heavy movement that stutters or more specificly skips frames even though no rendering lag or encoding lag happened. I wasn't streaming so can't be internet either. When I use G-sync, V-Sync, and tripple buffering same thing happens but feels unstable in a way. So far the only way to avoid it is to use a fast mouse so the stutters in the preview/video are barely noticable. Slow panning makes it very stuttery. I tried reinstalling windows and going to windows 11 with the same issue I then went back to windows 10 checked and updated all my drivers and it is still there. Windows is updated and reinstalled graphic drivers too. It happens on both one monitor and two monitor setups. weird part is that if I play a game the game dosen't stutter, it only happens in the recording and obs preview in other words windows desktop all my pc components are pretty cool too and my cpu reaches max 78 when gaming without limiting fps I am using a 3080 10gb and an i5-12600kf with 32gb of ram. It happens with all refreshrates and become worse when fps and refresh limit is 60. If fps is not 60 I get a constant timed stutter until I reach above 100 fps where it just makes the video look less smooth. Limiting fps dosen't help I have tried RTTS and Nvidias own fps limiter but it only makes it smooth for a bit before the stutter comes and goes as the camera in game moves sideways. I noticed that "thick" screen tearing happens at the same time as the stutter but I can't be sure there is a connection. I can provide videos if needed but since it isn't obs to my knowledge, then I don't think they can fix it.
Last edited: Oct 1, 2022
R

I've had the same issue since August or September when capturing from my Switch. The only thing that has changed since then is that I had to install a new motherboard. Everything else is the exact same: OS (Windows 10), RAM (32GB), Video card (GeForce GTX 1660), and Processor (Ryzen 5600G).

The problem is that after a few minutes, I'll get stutter coming from my capture device (a Liverstreamer Cap 4K from Avermedia). The stutter is not present on streams or when I record gameplay. The stutter is absent if I use Avermedia's RECentral, but after around 15 minutes, I get an annoying audio delay, which is driving me crazy. And during streams, I've noticed that I do get that annoying audio delay.

I thought the problem might be my capture device, but I tried with another brand of capture device, and I still get stutter with it. No amount of tinkering with different options or possible solutions from threads have helped.