Plugin for OBS Studio to add Audio Monitor dock and filter. It allows you to put the audio of a OBS source to an audio device by adding the Audio Monitor filter on the Source in OBS Studio. 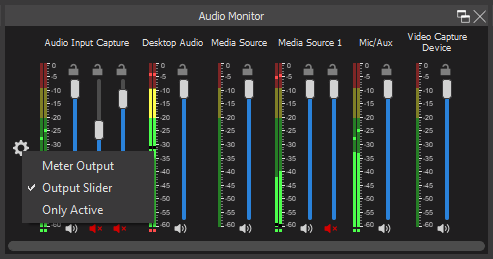 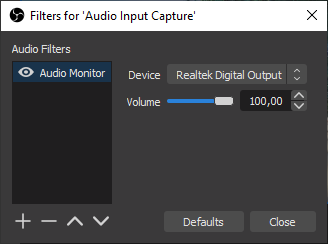 This can be useful in different use cases:

The idea for this plugin is a request from FeVR

Donations
You can donate to me via PayPal, GitHub or Patreon.
Reactions: kondado, Lyfesaver, enoc_vt and 2 others

I completely reinstalled OBS, uninstalled voicemeeter and a virtual cable, but still get the same problem. As soon as I add the audio monitor filter to the 'desktop audio' in OBS all the sound from the entire computer suddenly becomes robotic, tinny, and LOUD. Pausing the sound doesn't even stop it because then the sound it becomes 'frozen' on one loud tone. Removing the filter immediately fixes the problem. I haven't got any other audio things installed on my computer like virtual cables that might be messing with it. How can I fix this?

Exeldro
To find out what goes wrong I need more information about your setup. Can you provide me an OBS log file?
it works perfectly the only thing I would add is the possibility of sending audio to the vod track of twitch so that audio will not be excluded from the vod
Holy sh*t... I'm sure VoiceMeeter is incredibly powerful, but this plugin has made VM obsolete for my use-case. Thanks, man, great work!
So good. These updates are really doing some good in the world. I mean, I am not talking rescuing a bus full kids from a collapsing bridge but something along the lines of McRib being available for an extra month this year. Please keep up the great work!!
Thanks for the continued updates. Everyone over at FeVR is lovin' it!!!!
I am ecstatic about this plug-in, but probably not for the same reasons other people will be.

I won't bore you explaining why, but I need to send the OBS video and audio from my personal computer into a second computer running Zoom and other streaming apps. I do this using the HDMI output and a video capture card on the second computer.

For whatever reason, OBS, until now, would only send a "rough" audio mix out of the HDMI port and all other monitoring ports. The one critical component this mix was lacking was clean cross-fading between scenes during a transition. The "new" scene's audio would start as soon as the scene was activated, and the "old scene's audio would abruptly cut out. Given that this was the mix playing out of the HDMI port, it was the mix that my stream audience would ultimately hear - and being primarily an audio guy, I didn't want to live with that.

After weeks of tooling around, I finally came up with a workaround using NDI to send audio to the NDI Studio Monitor and then out the HDMI port. It worked, but it involved way too many apps and introduced too many potential train wrecks into the picture.

The Audio Monitor plug-in came along just in time, as I was getting nervous about doing my first "real" livestream knowing that any one of the several links in my chain could fail somewhere in the middle. Audio Monitor eliminated NDI altogether, and also relieved me of several steps I'd have to take before each stream and each time something went wrong along the way.

It's easy to get up and running and does so much more than I have asked it to do. Just remember that, depending on how you configure it and route to the various monitoring devices, you may have to mute the default monitors within OBS. If I was able to figure it all out, you'll be able to do it, too.

Good luck. I think you are going to love this plug-in!
It's got some good potential... I like what I'm seeing so far. Only thing missing aside from some cosmetic updates to smooth audio response is to have key bindings on the Audio Monitor channels so that they can be used with for example, a Stream-Deck
This was a serious void in OBS. Thank you for stepping up and your hard work. This solved so many problems I had! Seriously A+
Perfect free replacement for Voicemeter. Can do most of the things a normal person wants to use Voicemeter for, but is much easier to use :D
Amazing plugin and awesome support too! :)
10/10
Read more…
Top