If it's possible I'm hoping to use this method to project multiple windows from OBS in a similar way to the picture bellow (top right.) I'd also like to record just the canvas in OBS.

Reasons to use this Feature

- I teach an art class online but I often zoom in and out of my image. I would like a way to show my students the whole canvas as I'm working while picking up the animation of the brush stroke/tools being used.
- Make Speed Paint recordings, again picking up the whole animation of the brush or tool I am using.
- Projecting multiple windows to use as reference. Sometimes I want to draw on my screen tablet but look at my other monitor since it has better color. To do this I need to see the brush stroke in real time.

Hope this picture helps show what I mean. OBS related stuff is to the right but I thought the rest of the image helps illustrate what I'm looking for. If there is someone out there with the smarts to make this happen you'd be doing me a real service. :) 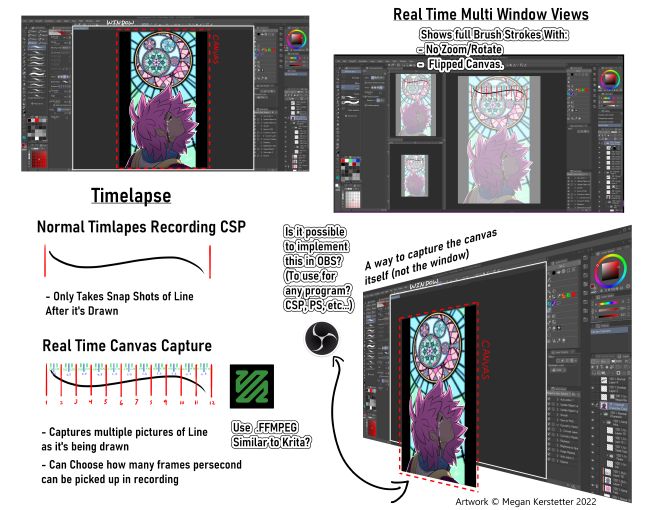 There are 3 other programs that I have seen duplicate and view a canvas in the way describe above: Krita, Affinity Photo, and Affinity Designer. For the life of me I do not know how they work, but it would be great if there was a work around to do this using OBS and Clip Studio or even Photoshop.

I made a similar question to this one, because i try open twice the same file, and leave one static, but obs not recognize it as a independent window... this could be super helpfull
You must log in or register to reply here.
Share:
Reddit Pinterest Tumblr WhatsApp Email Share Link
Top