Hi - I am new here but have tried and tried to figure out out to have a powerpoint presentation running on screen.

I can put powerpoint 'on top' of OBS but that doesn't seem right - it is no 'In' there, if that makes sense.

Obviously I am not technically minded. But my goal is to run a powerpoint presentation with me in the corner talking about what is on screen - I am missing something obvious I know but I just can't figure it out.

Top pic is what I have - bottom pic is with ppt presentation 'over the top' of OBS - not in the red square, which I believe it should be.

Keep in mind that OBS is a tool to composite a video stream. This means, you feed OBS one or more sources, OBS puts them together and renders a video from it.
You want to broadcast your ppt presentation with you in the corner talking. This means 2 sources: one for Powerpoint and one for a camera or webcam that shows your person.
Once you add the sources to OBS, they appear on the preview of OBS and can be arranged, cut, moved, resized. Here you design your video. You don't need to make the Windows desktop look like your stream. You need to make the preview window of OBS look like your intended stream.
A final remark about Powerpoint: Unfortunately, Powerpoint is nasty for capturing. You will probably end with using display capture and either capture the fullscreen presentation or crop the Powerpoint window. If you're capturing a projector, it's easy. If you only have one monitor, it's more difficult.
J

Koala, thanks so much for your response and explanation. Very much appreciated.

All taken all on board - I'd still like to try it. The problem I am having is 'how' do I put my PPT on there - I just can't work it out (yes, it is probably a ridiculous question) - I have been fiddling with scenes and capture - I actually need baby-step by step on how to literally capture the ppt - usually I can work things out. (I can get me on there via the webcam).

YouTube videos - they are titled ' how to load your ppt onto OBS' then when they start they are already loaded/captured!

Are you able to give me some pointers on this part please?

Hi Koala,
Thanks again.
I know I am missing something or perhaps it is just refusing to do it but, this is what I am seeking.

Step 1: click Display capture (or should I say 'add') from bottom
Step 2: What? - ie how do I get my ppt presentation (or try to get it) into the red box? Do I right click on that box and do it via that menu?

That's what I am stuck on - step 2, ie the process/or process or 'what actually/physically' to do/press etc to actually try to place the ppt presentation.

... e.g. so when I click on game capture (or any of the other suggestions) it comes up with a box with a default name etc - how do I point that (or what do I do) to get it to look for my specific powerpoint presentation - if that makes sense, how do I put the file location/name in to point it in the right direction to at least try showing it.

Sorry - not explaining this very well.

If you use display capture, OBS captures whatever is displayed on the monitor you capture. To capture a Powerpoint slide, you have to make Powerpoint display this slide on that monitor. A bit tedious, if you only have one monitor. Are you going to do your presentation with a projector to your computer? In this case, the projector will appear as additional monitor as soon as is is connected and switched on, and you can capture that monitor.

If you do your presentation just with your computer, you have to run OBS minimized/in background, since the presentation must be in the foreground (with display capture). If OBS is in the foreground, OBS will capture itself, which results in the endless mirror view. You can use hotkeys for OBS to start/stop recording or streaming.

If you don't use a projector and don't need to present fullscreen read on. I played a bit with Powerpoint and found different presentation modes. Unfortunately, I only have a german version of Powerpoint, so I cannot tell how it is called in english, but you might deduct this from this screenshot: 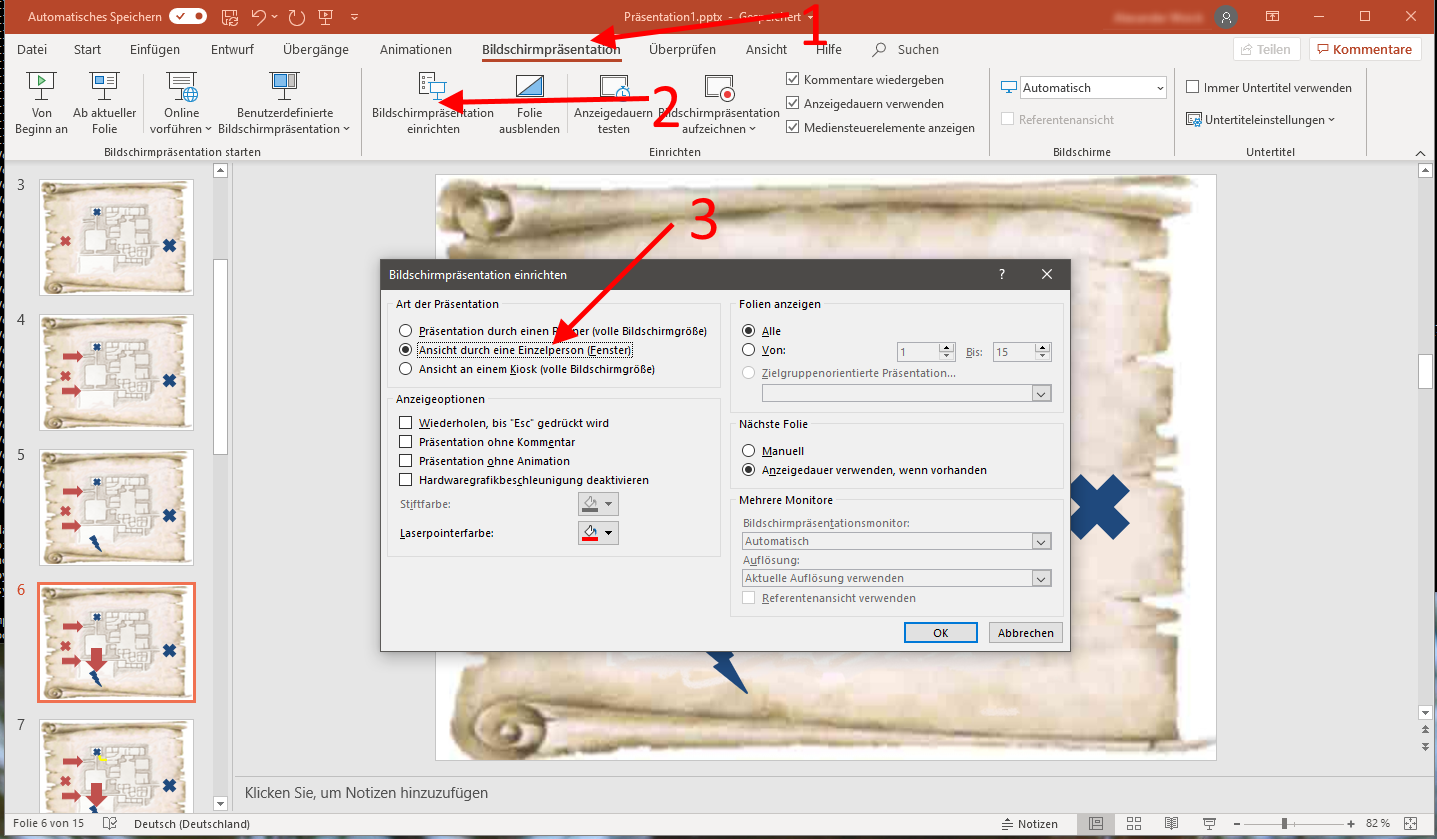 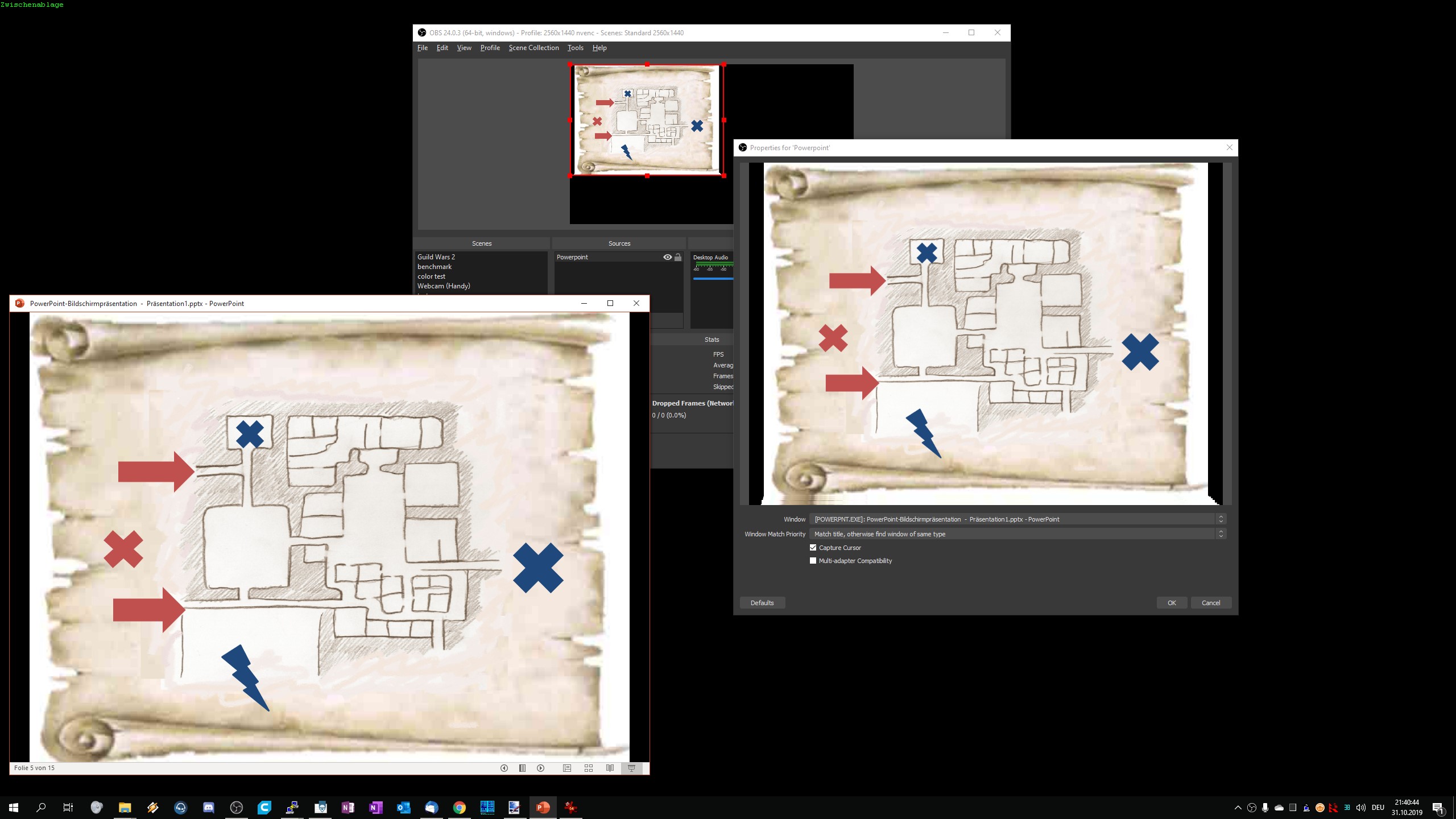 With this, I am able to advance the slide and OBS gets it. On the right, you see the properties of the window capture I used for this Powerpoint file.
To make the Powerpoint rectangle in the OBS preview fullscreen within the resulting video or stream, right-click the source->Transform->fit to screen. Keep in mind, this will upscale the source, so you should make the original Powerpoint window as large as possible.

Play with this. Moving and resizing sources, capturing different windows, arrange and resize them on the OBS preview. This is all basic knowledge how you can make OBS display what you want.

Thank you @koala! This is exactly what I was looking for.
G

The same problem but not just for powerpoint but literally the whole screen is being projected :( No answer yet. I tried doing the stuff above and yet wasnt work.

geraldmd said:
The same problem but not just for powerpoint but literally the whole screen is being projected :( No answer yet. I tried doing the stuff above and yet wasnt work.
Click to expand...

Are you doing a Display capture or a Window capture? [there is a difference]
G

Lawrence_SoCal said:
Are you doing a Display capture or a Window capture? [there is a difference]
Click to expand...

Let me clarify, even the window or display capture....it will lead me with the same problem. I tried using some other programs and it still the same.
G

Is there a way to use OBS Cam in Power Point when using "Record Slide Show"? Microsoft Power Point is not giving me an option to select OBS Cam as a camera source. Interistingly e2esoft ivcam shows up as a virtual cam source but that's more to use your phone as a webcam. I'm trying to use my dSLR which I've successfully connected in OBS.
N

Is there any plugin like OBS remote deck to control power point in background of OBS?

I am on a single monitor setup.
N

Widow captured is not working. It does not capturing my Microsoft ppt presentation it just capture white board plz suggest me solution

I'm a newb, and I joined the forum for this (and took the name Viking-kong (it was available!!!)).

I love OBS, and have been using it for about 3 months, but I hit a wall with Microsoft PowerPoint. I am currently assuming that MS is to blame.

I am doing training material and would like to capture:
These are then combined to a scene, with a talking head in the upper right corner and some stuff going on in an application. This scene setup works nice for all other applications with hotkeys etc. and it's well documented on YouTube.

BUT it is not possible to capture normal presentation mode in PowerPoint.

Some suggest running PowerPoint in a window with this setting: 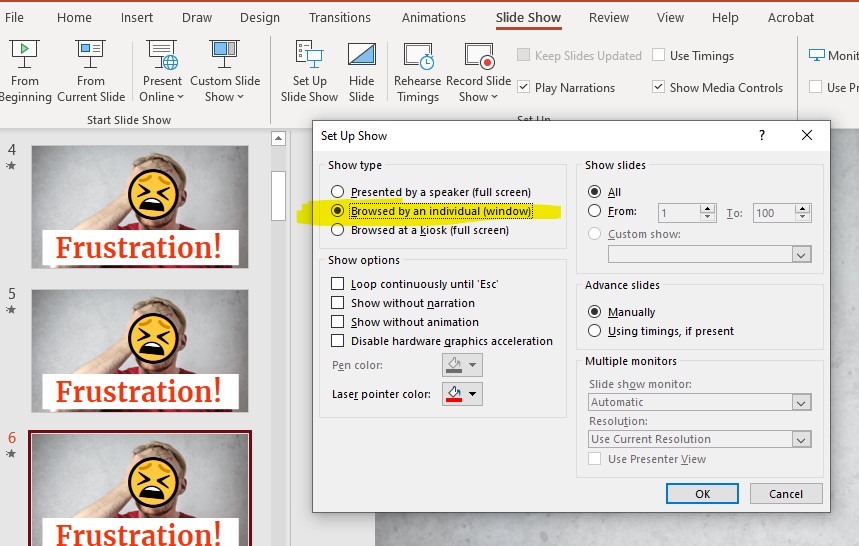 But this gets you a window that you have to crop and scale (I can live with that), but you also lose the presenter tools found in the lower left corner when presenting. You actually get some nice tools i.e. a pointer and *ta-daaa* LIVE DRAWING, which is very cool for explaining stuff. 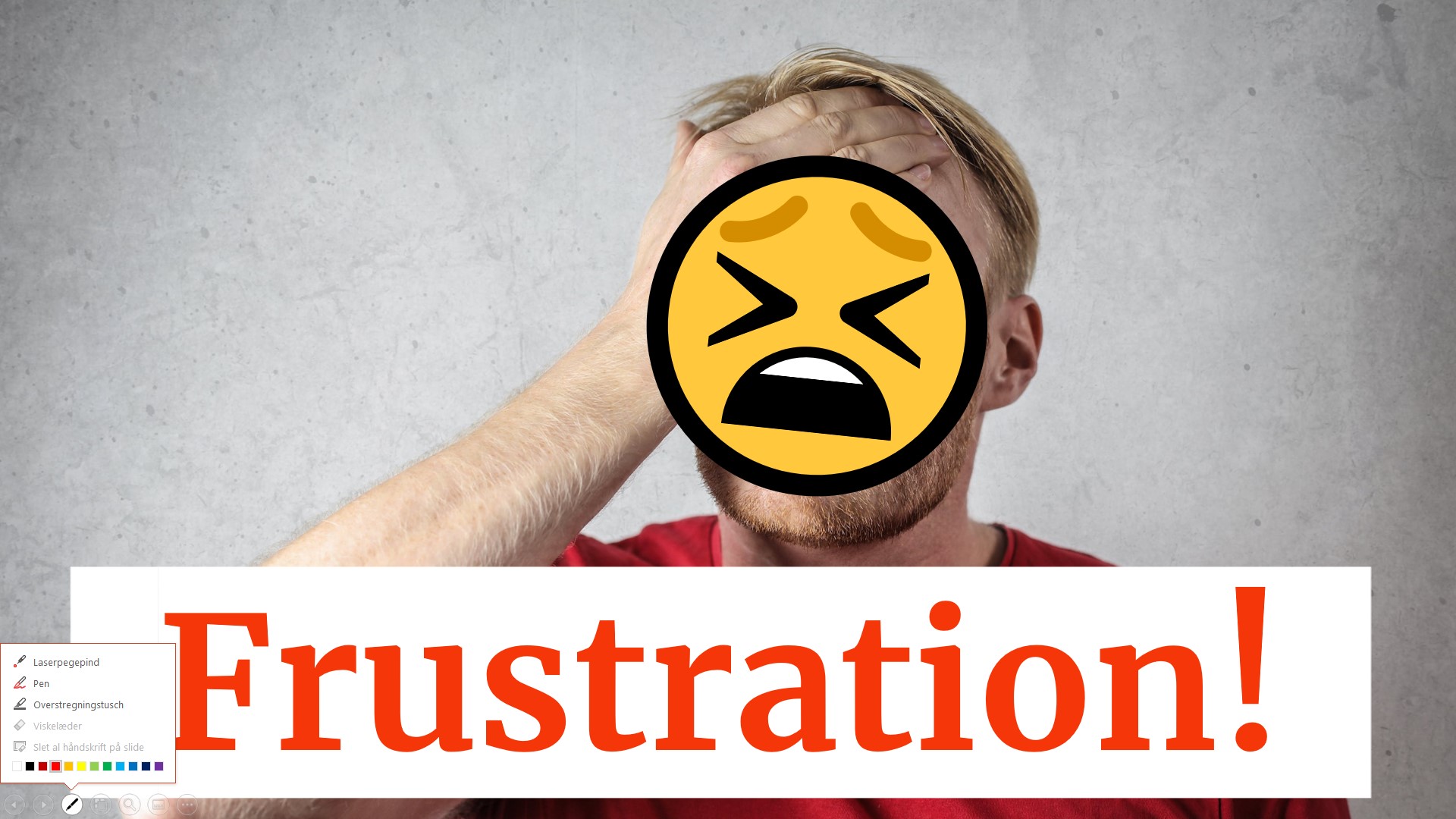 Does anyone else record live drawing on slides and if so how?
L

For folks like myself, we specifically want Windowed Slide show, as my use case is unlike yours. I've got a PPTx slide show in portrait mode on left ~1/3 of my screen, video on the right side. And then I use the Windows Capture, using old capture approach so mouse is hidden

You can certainly do full screen PPTx slide show. But I'm guessing you don't have dual a monitor setup?
If single monitor, and you setup using PPT in normal full screen Slide Show mode, you'd use Display Capture, right?
Or are you thinking of PPTx presenter mode?

Am I right that the issue is which PPTx slide show mode you use, and the number of monitors you have, and whether you need to be able to interact with OBS GUI at same time (vs using hotkey or similar)?

Lawrence_SoCal said:
Am I right that the issue is which PPTx slide show mode you use, and the number of monitors you have, and whether you need to be able to interact with OBS GUI at same time (vs using hotkey or similar)?
Click to expand...

Yes, I only have a laptop (but I will get a monitor, if that is the fix ). The result I am looking for works with the MS Whiteboard app (although it does not offer real full screen).

And by putting PowerPoint in windowed mode, you only get to navigate the slides with the keyboard..

Here is the whiteboard app with a watermelon ballon instead of me.

I really like the recording of drawings as it makes the presentation dynamic. 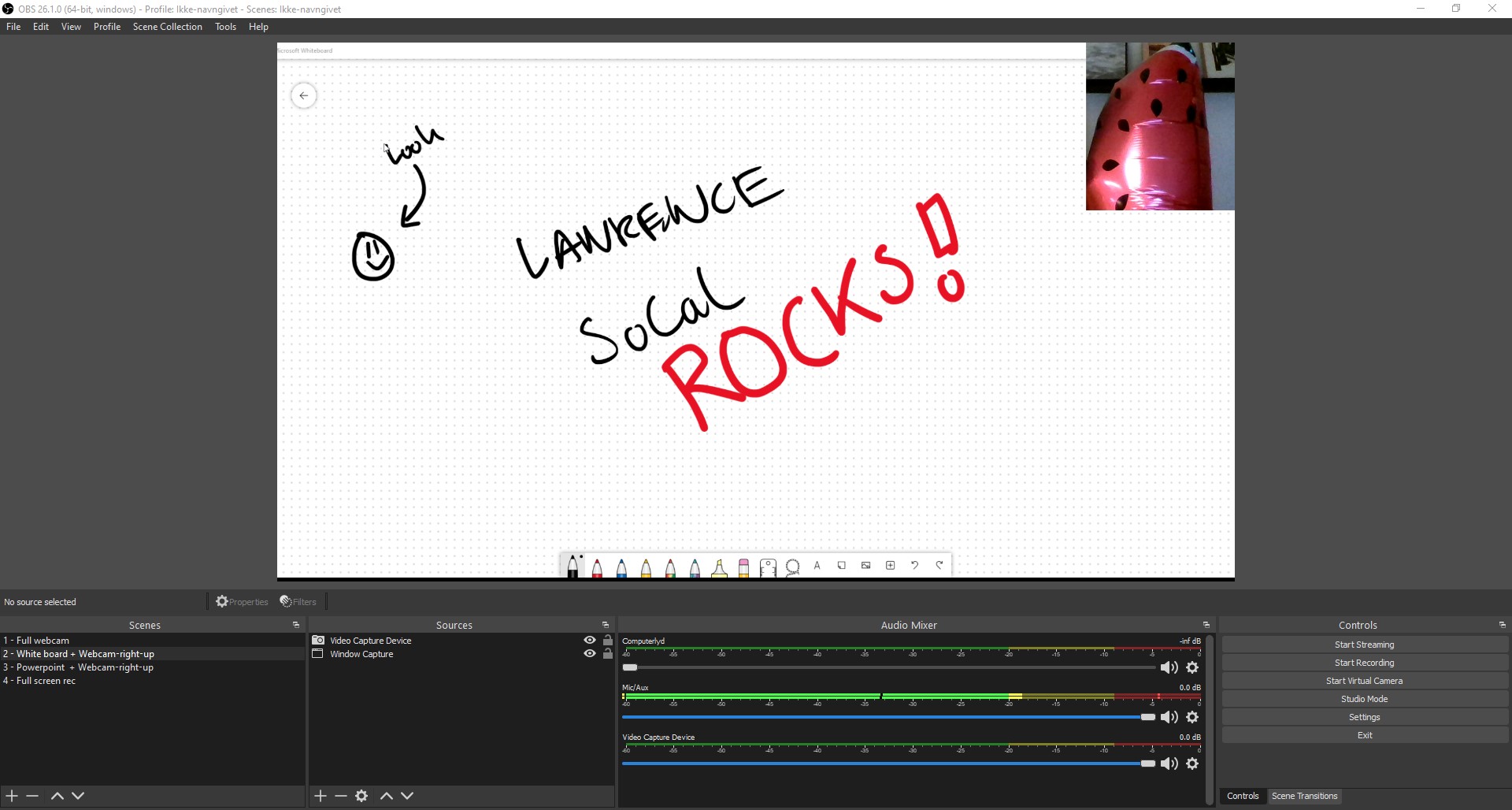 Lawrence_SoCal said:
Am I right that the issue is which PPTx slide show mode you use, and the number of monitors you have, and whether you need to be able to interact with OBS GUI at same time (vs using hotkey or similar)?
Click to expand...

This worked. I connected my small Andycine monitor that I normally use for video on my DSLR. I put the presentation notes etc on the small cam monitor, and I can record with ALL the tools on my laptop :-)

Thanks for bringing this to my attention!

OBS, if possible, should pay more attention to Power Point's windowed recordings. If you're on a laptop and do not have a secondary monitor available, it seems your only hope is "Screen" recordings with shortcuts mastering and/or video editing.

Doable, but not nice.

I had the same problem, and might have found a solution. However I am using Ubuntu.
I only have my laptop screen and window capture does not refresh frequently enough to do a power-point/google presentation.

So I had to use Screen recording instead. But I have only one Screen, which needs to be used for OBS.
So I installed an extra screen, which is virtual. Now I can move my presentation to the extra virtual screen, and use that screen capture within the OBS. When I move my cursor out of the screen to left or right, i still can see the cursor though the OBS itself.
Worked out nice. Hope there is a similar virtual screen for windows as well.?

This is the virtual screen I used. It will make a virtual display device and it will appear as an extra monitor is plugged in to your computer in the display settings. you can arrange its "virtual position" and extend desktop to whatever your convenient direction is. 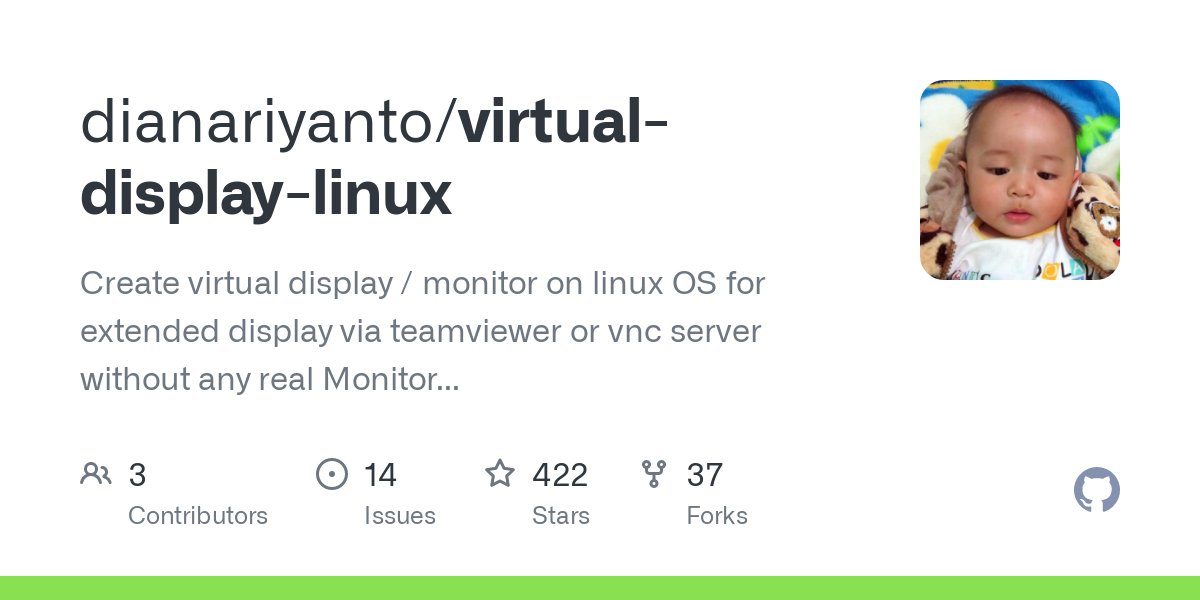 GitHub - dianariyanto/virtual-display-linux: Create virtual display / monitor on linux OS for extended display via teamviewer or vnc server without any real Monitor is Plugged In.

Create virtual display / monitor on linux OS for extended display via teamviewer or vnc server without any real Monitor is Plugged In. - GitHub - dianariyanto/virtual-display-linux: Create virtual ...