There is no black screen with other panel. It simple detects only 1 panel which is selected as main monitor. I have tried all advises here from forum including. I have also selected preferred graphic adapter the integrated one, but still does not help. What is funny that previous product OBS detects both monitors. The OBS Studio does not, and I believe it supposed to be newer and better. I would say this is something which needs to be fixed on program level rather than asking users doing this or that and for some people it works, and for some it does not but perhaps I want too much from the project is is based on free open license. I don't know what else should I try. Thanks anyway.
B 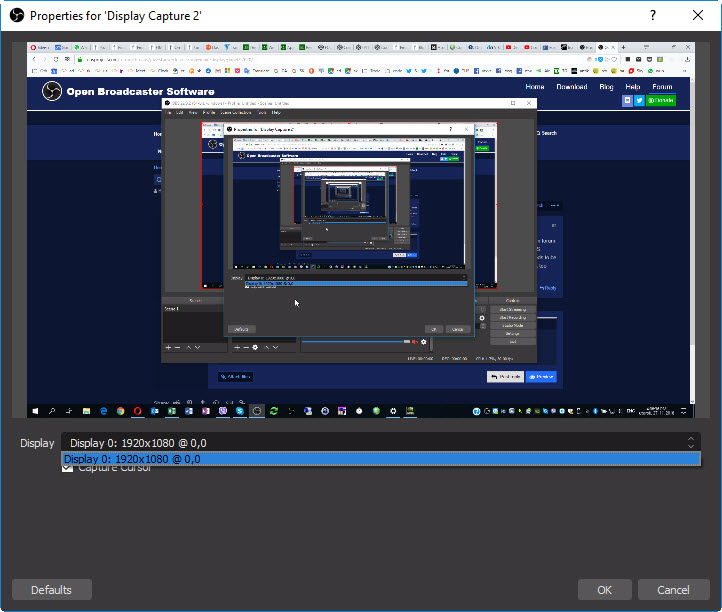 I have the same problem :( and I don't know how to fix it.

OBS can't display capture a display that is connected to a video card it's not running on.
B

This is confusing for me:

- Using NVIDIA settings I made all programs to run on integrated graphics as seen on screen 1.
- On screen 2 and screen 3 it is seen that also obs64.exe (obs studio) is running on integrated graphics adapter.
- However screen 4 shows that my external LG display connected through HDMI connector is still running on GeForce GTX 1050 which is strange.
- Then when I enable utility called "Display GPU activity Icon in Notification Area" (screen 5) and I open it through this icon, it shows GeForce GTX 1050 still powers obs64.exe on LG HDMI connected external display (screen 6).
- The only way how to enable recording from internal notebook monitor is to make this internal notebook monitor primary (through windows display settings ==> make this my main display), which is annoying, because I would like to record from both monitors at the same time into 3840x1920 format and I believe by choosing Integrated Graphics in NVIDIA control panel ==> Global Settings this should happen.
- When I make laptop monitor my main display through windows display settings, according to it GPU monitoring utility, it is still powered by GeForce GTX 1050 (screen 7), so there seems to be no change in graphic card.
- With OBS classic it perfectly works with no issues (screen 8). I don't know why it does not work on OBS studio version obs64.exe. Thanks for your thoughts.

I doesn't work in OBS Studio because the developers disabled that functionality, the means of capturing across display adapters is slow. It still exists but in a limited fashion in Game Capture, Display capture no longer supports multi-adapter.

OBS Studio will only display capture from the primary adapter that OBS is launched on, this is typically the "Main monitor" adapter in windows, unless you have switchable graphics, then it is the preferred adapter.
Last edited: Dec 3, 2018

OBS is running on one GPU. On that GPU, one or more monitors are connected. OBS is able to display capture these monitors, but no monitors that are not connected to the GPU it is running on.

So, is there any way to make sure laptop monitor, also external monitor, also OBS Studio run on the integrated GPU? If so, I believe I would be able to capture both monitors to one video at the same time since there will be only integrated GPU in use, which meets the condition of recording only monitors which are powered by same GPU as OBS Studio is powered by. I hoped above screen-shots would help me to achieve such status, but obviously it does not work. Similarly I tried to disable NVIDIA or Integrated GPU in device manager but it did not help. Laptop monitor was captured only at the condition when it was selected as main display. Funny.
You must log in or register to reply here.
Share:
Reddit Pinterest Tumblr WhatsApp Email Link
Top