Is this capture card broken?

Hey everyone,
so I recently bought an external capture card off of Amazon, which I got today, and I am not sure if it's broken or if I'm just too dumb to use it properly. My goal is to capture footage from my PC. The capture card has an HDMI input/output as well as a USB 3.0 output. I connected the HDMI output of my graphics card to the HDMI input of the capture card and the output of the capture card to my monitor. And of course the USB. Windows recognizes the capture card as a camera and I actually get the option in OBS to pick a video capture device called "USB Video" but I don't get any output as you can see in the picture. I tried the same thing on my MacBook and it's the same thing there. Is there anything I am missing since this is the first one I ever had? Or is it probably just broken?

Thank you in advance :)

Make sure your resolution is set to Default, or the exact resolution of your input. If there's a mismatch, it will have no ability to display a picture.
G

How do I change it?
F

You can change it in the source settings in obs, it says "custom resolution"
Did you install the software and drivers for the card?
Are you single pc streaming, as in gaming and streaming from the same pc
G

I'll try to change it in a second. And there is no software, it's supposedly "plug and play". And yes, same pc.
G

I tried changing it to the output resolution but I didn't change anything. 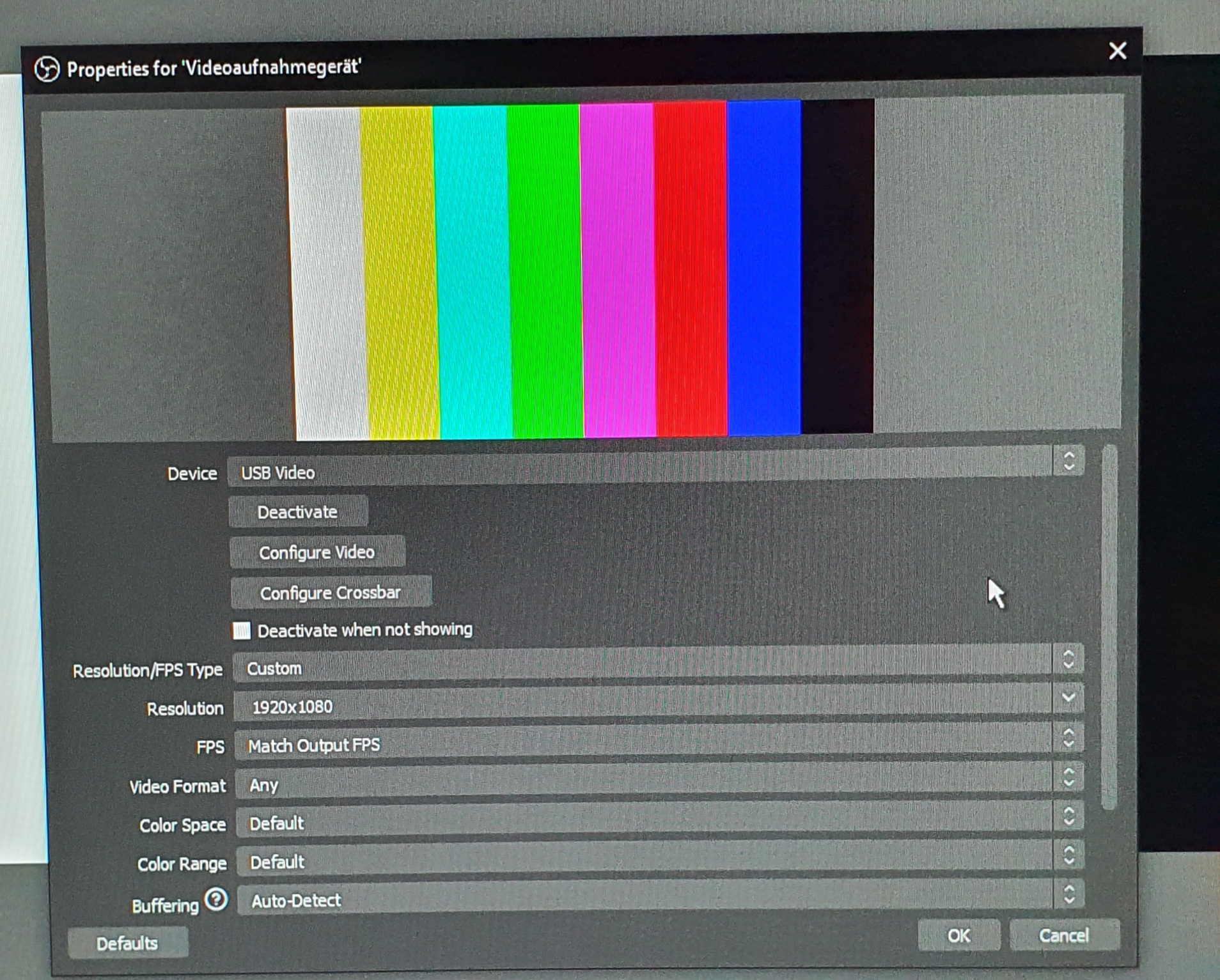 It is not necessary to use a capture card if you're doing a single pc stream, and it will typically have much worse performance than using window/display/game capture

GE_Hubit said:
I tried changing it to the output resolution but I didn't change anything.
Click to expand...

Those are color-bars. Many capture devices will output them when they are not receiving a signal, to show that the capture device is working and outputting captured video to the host system.
Unless you set up the capture card as an Extended Monitor or Mirrored Display in the OS display settings, your GPU isn't sending any signal, and so color-bars.

But like @fatmatrow said, using a capture card will RAISE your overhead in a 1PC setup. You only use capture cards for recording other systems. It's like driving ALL the way across town and back, every time you want to visit your neighbor.

A capture card in a 1PC has to: Composite the desktop, Output video over the GPU, be intaken by the capture device, (be encoded by the capture device to fit within USB 2.0 bandwidth limitations, on a 2.0 cap device), be transferred over USB into system memory, be decoded by the CPU, be sent over PCIe into the GPU's VRAM. And it eats up one of your GPU's output ports (most GPUs only 'get' to run four monitors simultaneously).

Game/Window Capture copy the video texture from one spot in the GPU's VRAM to another, staying on-GPU the whole time.
Super quick. No bus load. No extra CPU decode load. It's great.


There are a VERY FEW edge-cases where 1PC capture-carding is needed, but they are exceedingly rare. Seriously, don't. It's dumb.
G

Thanks to both of you, I'll probably send in back then. But it's still kind of weird, since it doesn't even show up in my OS display settings. I can't even set it as an extended monitor or a mirrored display.
You must log in or register to reply here.
Share:
Reddit Pinterest Tumblr WhatsApp Email Share Link
Top