Tool to rename your webcam. It will remain as is in the device manager, but OBS, Zoom, Teams, WebEx, GoTo etc. will find under the name you gave them.
Especially useful if you have more than one cam of the same make and model.

Before renaming the tool will create a backup of the status quo - as a reg-file. So double-clicking those will bring things back to where they were.

Read more about this resource...
Q

Hi falti, I saw this and downloaded it as I have 2 identical generic USB cameras plus the integrated camera on my old Dell studio laptop I am having problems switching between the two USB cams. If I switch directly I get a black screen I have to switch to the integrated webcam first and then I can get the other USB camera. I thought it might be because they are both called usbcam in the properties list. However when I tried a dummy run with Camrename only the integrated webcam shows up in the camera list even when refreshed. Even if the names being the same isn't the problem I would like to be able to rename them to aovid confusion. Have you any idea what might be the cause please?

When CamRename lists the available cameras I use a standard DirectShow API (part of DirectX).

If that API does not find the 2 USB cams then something is wrong software-wise.

What make and model are they?
How doe they show up in DeviceManager?


Can you just get 2 new decent ones like Logitech C920?
Q

Thanks for getting back to me falti . The cameras are generic Chinese and unless the manufacturers name is in the Chinese part of the instructions which I cant read, It's not printed in the English part of the instructions or on the box.
In device manager both show up as USB CAMERA but in windows 10 settings Devices section, they are both called USB PHY 2.0.
Device manager says they are working correctly. They both show as USB CAM in the OBS camera properties drop down list. I have included a couple of page snips to show these. One thing I did find this morning is that if I open Camera in the start menu in Windows I can use the icon at the top right to scroll through all 3 cameras. It's only on OBS I get the initial problem and the reason for wanting to try renaming the usb cams.in that I can't move from one usb cam to the other without first swapping to the laptop webcam. and thought that renaming might sort that out.
Whilst changing to Logitech cams would be very nice I'm afraid the budget doesn't run to that at the moment. I may try to get something else more affordable just to see if that works. If I can get this sorted so that I can set up a scene for each camera and use hot keys to swap between them then all I need to do is find a way to connect OBS as a virtual camera to a second laptop running Zoom so that the operator on the OBS laptop can do all the camera changing and graphics and leave the host on the other laptop just doing Zoom. If you have any ideas on how to do that I would be grateful for them. 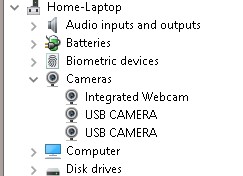 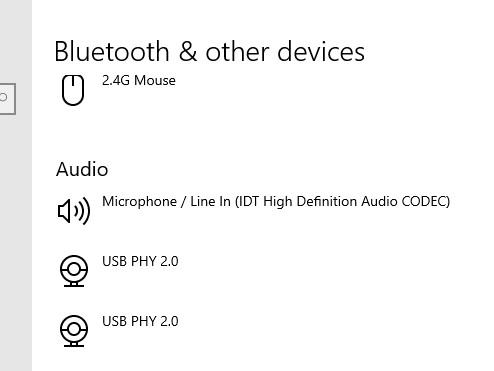 I think I understand now. Regarding a 2 PC setup, one running OBS, the other one Zoom I have no easy solution.

Regarding the 3 cams: every now and then I have seen issues when disabling and enabling my 2 cams too. Often restarting OBS was required.

My solution: one scene per cam so they're both always on - and then embed them nested in the production scenes - switchable with hotkeys.

Hi falti thanks for sticking with me on this. I expect you have more to do than worry about this for now so I wont expect anything over Christmas.
I have been playing about with stuff and at the moment the situation is as follows
I have three scenes called Face, Left camera, and Right camera, The only source in Face is the integrated webcam . In Left camera it's one of the webcams positioned to my left and in Right camera it's the other one on the right. I can select either of the two scenes using these 2 cameras from the scene called Face, but I can not select Left camera scene if I have Right camera scene open and the same the other way round. I can select Face from either of the other two and then select either of those from Face. I have deleted scenes and sources, restarted OBS but can get no better than that. Is what I have done what you meant by one scene per camera?
As to the other I had thought of using either a network cable or a bridging usb cable might do the job but from what I have read that would be fine to transfer files etc. but not for what I would like to do. I am now considering using extended desktop on to a second monitor and keeping zoom on one and OBS on the other. It's not my ideal but does at least keep them on separate. screens. Any way that's enough from me I hope that you have a happy , peaceful and safe Christmas I probably won't be online now for a few days but will be glad of any more suggestions you might have when I get back to it

All USB webcams can be renamed - and with this version you can rename certain (not all) virtual cams as well. Virtual cam renaming tested successfully with Snap Camera and EƖgato Virtual Camera.

When entering the license key with copy/paste from an email, the pasted string will now be trimmed, so that trailing spaces do not effect the licensing.
Click to expand...

Fixed a minor issue: remove trailing or leading blanks/spaces from a copied and pasted license key.
Click to expand...

In case you work with CamooZ: the "-" character will be used by it to split between camera name and profile name in the profiles list, e.g.:

This will confuse CamooZ, hence CamRename will from now on replace "-" with "_" before renaming
Click to expand...

Read the rest of this update entry...
O

F-Secure gives me the following alert when trying to open CamRename 0.3: Suspicious:W32/Malware!DeepGuard and blocked access.

0.3. is new, so not all AV already understand that it's ok. I compiled and uploaded by hand myself....it's a matter of trust now ;-)

Choose something like "run anyway" or do not risk it...your call ;-)

I just uploaded 0.3 - Virustotal is cool with it
O

I just wanted to inform you....

OpenFields said:
I just wanted to inform you....
Click to expand...

That's very welcome. And it brought me to think that, even if I compiled the exe, if there was a virus on my system it might still have done some bad stuff, so your post motivated me to check with virustotal ;-)
Thanks
Last edited: Jan 16, 2023
J

Much needed program saved my production. It would be super cool to rename the same devices' audio sources as they present the same problem.