I have been streaming for over a year now with OBS. When I logged in tonight to begin preparing for my stream, I realized that my camera did not show up. When I clicked on the properties, Device, FPS, and Video Format are all red. When I attempted to select the device, my c922 webcam was greyed out. The light on the camera was not on, and it always is on when I have OBS open. Thinking my camera died, I pulled out my old C615 and tried it. Same thing. No camera. I got on a website https://www.onlinemictest.com/webcam-test/ and my camera works just fine. My second camera works too. In addition to that, I also verified my camera works on XSplit.

I don't know what to do. I have tried unplugging the camera and plugging it back in. I have tried 3 different USB ports. I have tried closing and restarting OBS. I have tried rebooting my PC. I even uninstalled OBS and reinstalled with a clean slate of default settings. Still no cam. I saw a thread that mentioned changing the camera's default resolution to custom, but there were no resolutions to choose from. I tried typing the resolution, but that didnt do anything. I am running version 20.0.1 currently. I just streamed last week using this version and have streamed for a year like this, but now it's not working. 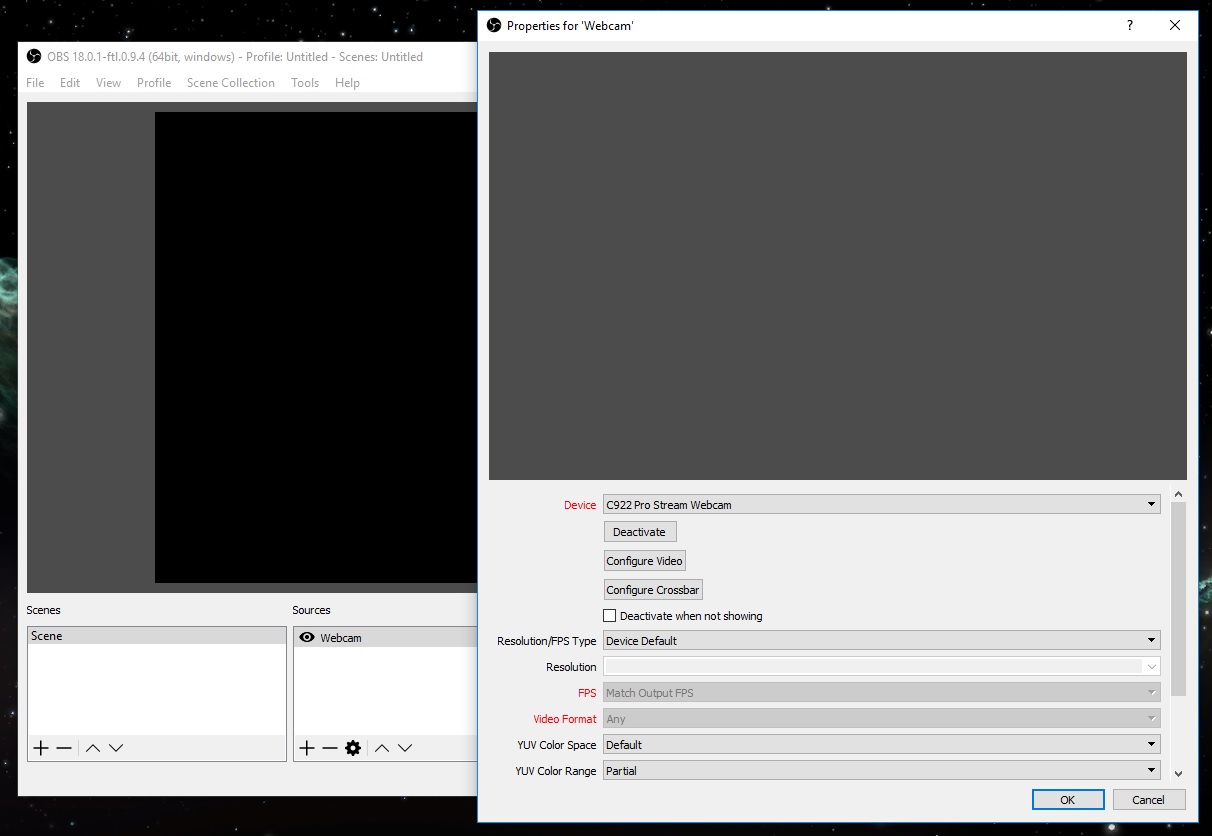 Anyone have any other ideas?

Something in your system changed to cause this. It doesn't just happen out of nowhere.

Always....
- Check your Universal Serial Bus Controllers via Device Manager to see if there are any warnings
- Shut down your computer and restart it over again
- Run OBS Studio

Your C922 properties should be set to something like this (what I use):
- Resolution/FPS Type Custom
- Resolution: 640x480
- Match output FPS
- Video Format MJPEG
- YUV Color Space: 709
- YUV Color Range: Full

I understand something changed. Obviously this wouldnt happen if nothing changed. I have checked the USB controllers and all of them say they are working properly. Like I said before, I have restarted OBS, restarted my PC, Ive even uninstalled and reinstalled with the latest version and an older version. No matter what I do it seems OBS just doesnt recognize any cameras. The cameras work just fine on their own and in XSplit, and my PC has no viruses or any other reason to make me think its anything outside of OBS. This just really sucks because I cant stream when I should be, and I don't know XSplit very well. Looks like I'm gonna have to brush up on it.
S

The fact of the matter is, it worked before and it doesn't now. In addition, many of us streamers use Logitech C92x series webcams and don't have this problem. If it was a problem, there would be posts appearing everyday on this topic. I would be having a problem with it right now as I have the same webcam.

Thats where I am coming from on this and why I asked you to reflect upon what could have happened. New software installs? Upgraded software? Windows update? New USB hub? Changed USB ports? Only you know.

After installing, choose the camera object and restore it back to default (there's a button to do that). Make sure you close down Logitech Framework. Reboot computer and then launch OBS Studio.
E

Just wondering if you have found a solution. I have the same problem with my webcam even tho it works in any other program. I don't have it open in any other software

Still no luck. I have tried everything I can think of. I even reinstalled Windows completely. I tried installing OBS on a different hard drive, and it was the only thing I installed after reinstalling Windows. There's nothing else here that could interfere with it. I'm at a total loss.

I guess I'm just going to give up and hope the problem fixes itself in the next release. This is devastating. At least I can get Xsplit to work. It just sucks that I have to redo all of my scenes and learn all the shortcuts. I have a stream scheduled for about 7 hours from now. Here's hoping I can get it done. I already had to cancel last night.
L

I'm having the same issue, :( -- the killer is that the camera works on my mac laptop in OBS. I don't use it for streaming but I guess I might, this is really a let down for me. I too was ready to stream a update to facebook and a whole morning of troubleshooting without resolution.
E

I'm pretty sure it happened after the recent windows 10 update. I tried OBS classic and it registers my webcam but i dont want to be using classic

Looks like it's not just me anymore. That's 3 of us. I can't just keep hoping for a solution, so I'm moving forward with XSplit until I hear OBS is working again.
E

im trying trying window capture of google chrome and that's not working for me either. are you having a similar issue?
S

Specifics below. Try to mirror with same exact settings.

Ebert said:
im trying trying window capture of google chrome and that's not working for me either. are you having a similar issue?
Click to expand...

Please refrain from entering unrelated issues other than the topic at hand. Create another thread.
M

I'm in the same boat, haven't touched any settings. OBS (20.0.1) was working fine with two logitech cameras [c922 and c270] running simultaneously. However, this week I get no picture at all. The cameras are working fine in the Logitech camera software, gaming software, and windows camera.

ujini said:
I'm in the same boat, haven't touched any settings. OBS (20.0.1) was working fine with two logitech cameras [c922 and c270] running simultaneously. However, this week I get no picture at all. The cameras are working fine in the Logitech camera software, gaming software, and windows camera.

Thanks alot, that worked the bitdefender changing of settings worked :)

THANK YOU @ujini!!! That is what fixed it! It looks like a new feature came out for Bitdefender that blocked only OBS (not Xsplit) by default. It explains why my OBS wouldn't work but XSplit did. So it turns out that I didn't do anything at all besides allow my Antivirus to update. Case finally closed, and my cam is working again!

So even though this thread is old - rather than recreate a duplicate one - I'm going to add to it if that's ok as it's directly relevant to me.
I am new to streaming, and plan to stream some stuff incl webcam from today onwards or as soon as I get it working. I am having the same issue (Logitech C920) as the others on this thread.
The camera will detect fine in the Camera app in Windows 10, but isn't detected in OBS. When I first set this up last year as a test this did work, so like everyone else - something in the 'environment' will have changed.
For those who have got this to work - could you do me a favour and share precisely what you did to fix.
Before I posted, I've tried dozens of reboots, locking down the PC so only minimal stuff runs, checking Bit Defender settings (but have I missed one?). Checking Firewall settings in Win10, reloading webcam drivers, moving the camera from one USB to another (another three, both with PC shutdown and PC running), and all the usually debugging things I can think of. Then I found this.
I assume it's a 'setting' somewhere, I just can't find it, and for now - the camera is not being recognised by OBS at all despite it existing on the PC and being usable by the Camera App if I want to.
Hope someone can help.

I'm the OP, and after trying everything, I found out it was Bitdefender causing the issue. By default, Bitdefender blocks many applications that have even a partial signature that could look malicious. Since your webcam can be used by hackers to spy on you, Bitdefender flags it as an application that has "too much control". There is an area in the Bitdefender settings that controls which applications are allowed and blocked, but the Bitdefender code seems flawed. Even after I set programs to be allowed, Bitfender continued blocking them without my input. In this particular case (as Ujini mentioned earlier in this thread) it turned out Bitdefender was blocking access to my webcam.
This also happened to me with a dozen or so games and my media player. I contacted Bitdefender support staff. They walked me through the steps to unblock applications. I followed their steps and attempted to run OBS. Sure enough, Bitdefender blocked the camera again. The only way I could truly prevent Bitdefender from blocking anything was to disable the entire module that governed the applications. When I did that, all sorts of alarms went off in Bitdefender, telling me my PC was unprotected. Knowing the cause, I acknowledged the notifications and went about my business. Then the notifications happened again. And again. And again. Bitdefender just kept nagging at me to turn the module back on. I contacted Bitdefender support again. They basically told me that their program is written this way, and there was nothing they could do to stop it. Either I turned the module back on and allowed Bitdefender to govern what apps I use, or leave it off and deal with the nagging notifications. I promptly uninstalled Bitdefender and installed Kaspersky instead. Haven't had a problem since. My OBS and camera work fine now, as do all my games and other applications.