Watching a lot of YouTubers and there recording software with OBS, a lot of their quality is immaculate and I'm trying to get that for myself. I've used a lot of tutorials on youtube and such but none were of help to me, are there any settings on OBS that I can change to get the outcome I am going for?

I normally play Minecraft, League of Legends and a few other games, I would send a clip of what I am currently getting as my output but it isn't showing up.

A GTX 1060 won't give you the best quality with NVENC, I currently use a 1070 and like your card it struggles to achieve quality even at higher encoder settings, it's a limitation of the Pascal NVENC implementation. I ended up using x264 on my i9-9900K.

If you have a fast CPU, x264 encoding will give you better results for a given bit rate. Either way, if you are encoding a 1080p60 stream or even a 720p60 stream at only 3 or 4 Mbit/sec your quality will suffer, you need to give NVENC more bit rate to get the same visual quality as x264. For offline recording for later use, you can increase the bit rate and it's not so important, but NVENC on the 10 series cards isn't as efficient as CPU x264.

To achieve highest quality many streamers use a second machine just for encoding, either capturing HDMI output from the game PC or sending full-screen NDI. That way you can do more intensive things like a two-pass CPU x264 encode without compromising game quality, plus do a high bit rate recording for later use, and you avoid all of the problems with single-machine display capture & encoding.


YouTubers will be using OBS to capture gameplay but recording at a far higher quality and bit rate for edits. For example, using FFmpeg to save ProRes HQ 4:2:2 at 100 MBit/sec for editing and uploading will result in a much better quality final version, after YouTube performs its own transcoding on your upload.

Provided you have adequate disk space and a fast enough disk, a recommended minimum quality for capturing footage for editing/YouTube publishing would be something like at least 75 MBit/sec (or for H.264, something very high, like x264 CRF 8 / NVENC CQP 6, or a lossless mode). 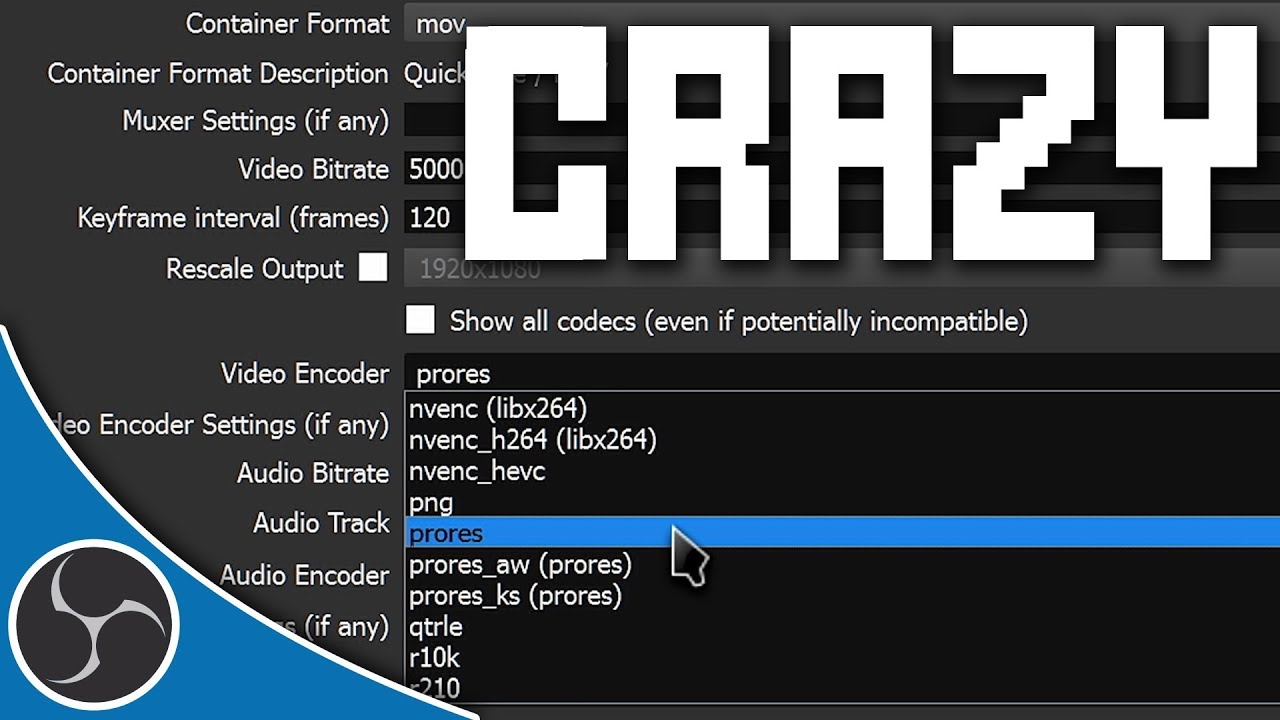 ▼▼▼ EXPAND FOR IMPORTANT LINKS & INFO ▼▼▼ Welcome to my OBS Studio MASTER CLASS - The most in-depth and comprehensive OBS Studio tutorial course EVER MADE. ...

StreamFX incorporates more FFmpeg-based encoder options for OBS (which were previously in their own plugin).

To avoid potential data loss, I record recording MKV and use the File -> Remux Recordings feature to remux to MP4 if needed. I can also use MKVToolnix software to manipulate or extract the MKV audio and video streams as needed.

ProRes or ProRes HQ does require a more powerful machine to encode and edit, however its picture quality preserves much more detail than H.264 unless you record lossless (intra). However, with the right settings, you can record NVENC lossless with minimal CPU impact and using a lot less disk space.

What is it you want to achieve, the highest quality possible for streaming, or a setup dedicated to recording footage for editing and publishing to YouTube?
C

Thanks so much for the helpful response, I'm planning on doing youtube and streaming combined, so I'm looking for the settings that could provide me with decent recording for twitch streams but also not look grainy and toned down for youtube... I haven't actually started streaming yet as I'm setting up a few things before I start, so I don't have an idea of what my streams will be like, quality-related. So I would say that I would rather prefer something more on the editing and publishing for youtube but sort of balance it out so that it fits streaming criteria too. (but a straight answer would be highest quality for recording footage for editing and publishing).
C

- I just tried out recording with x264 on Minecraft with nothing else changed. The quality seemed to have actually worsened. Whenever I moved the screen seemed sort of pixelated, but if I stood still for a long time everything looked fine.

Run as Administrator and turn Game Mode off
Also, post another log of streaming and/or recording with x264
C