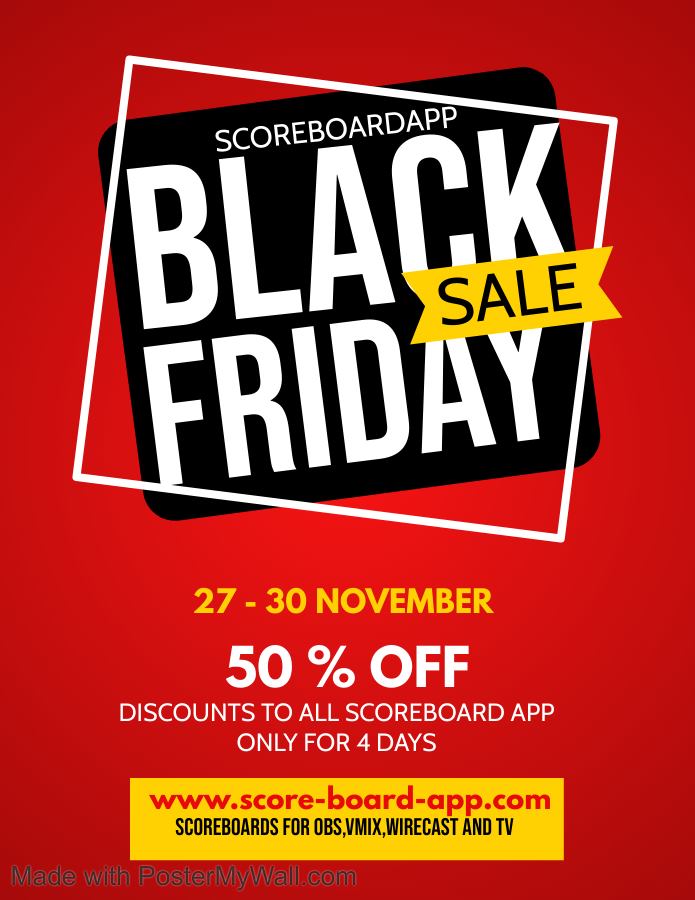 Hey guys.
So I decided to make a sale during Black Friday and Cyber Monday’s days. So in period of 27.11-30.11 of November there will be a 50% discount for all software.

And I am so excited to release a Basketball version. So the main features are that user can upload a png background of the scoreboard or use existing one and move all elements on the canvas as he wants. There will be Fouls looking like the circles which changes colors when user press add or subtract fouls, bonus button, countdown timers and more. So it will be available in couple weeks. It took a little more time that I’ve expected.
Of course I’ll make a tutorial, and of course free trial for one week for everybody)))
and As for now don’t forget to get a one week trial for all products and don’t forget to visit website during Black Friday.
Cheers.
P.S. and yes, after basketball I’ll make an ice hockey ))

I've uploaded a FUTSAL.Pro version. So what it can. It shows lineup, scoreboard, cards, fouls. Almost every text can be changed.
Now user can update squads without closing and reopening the software.
Here are some screenshots. 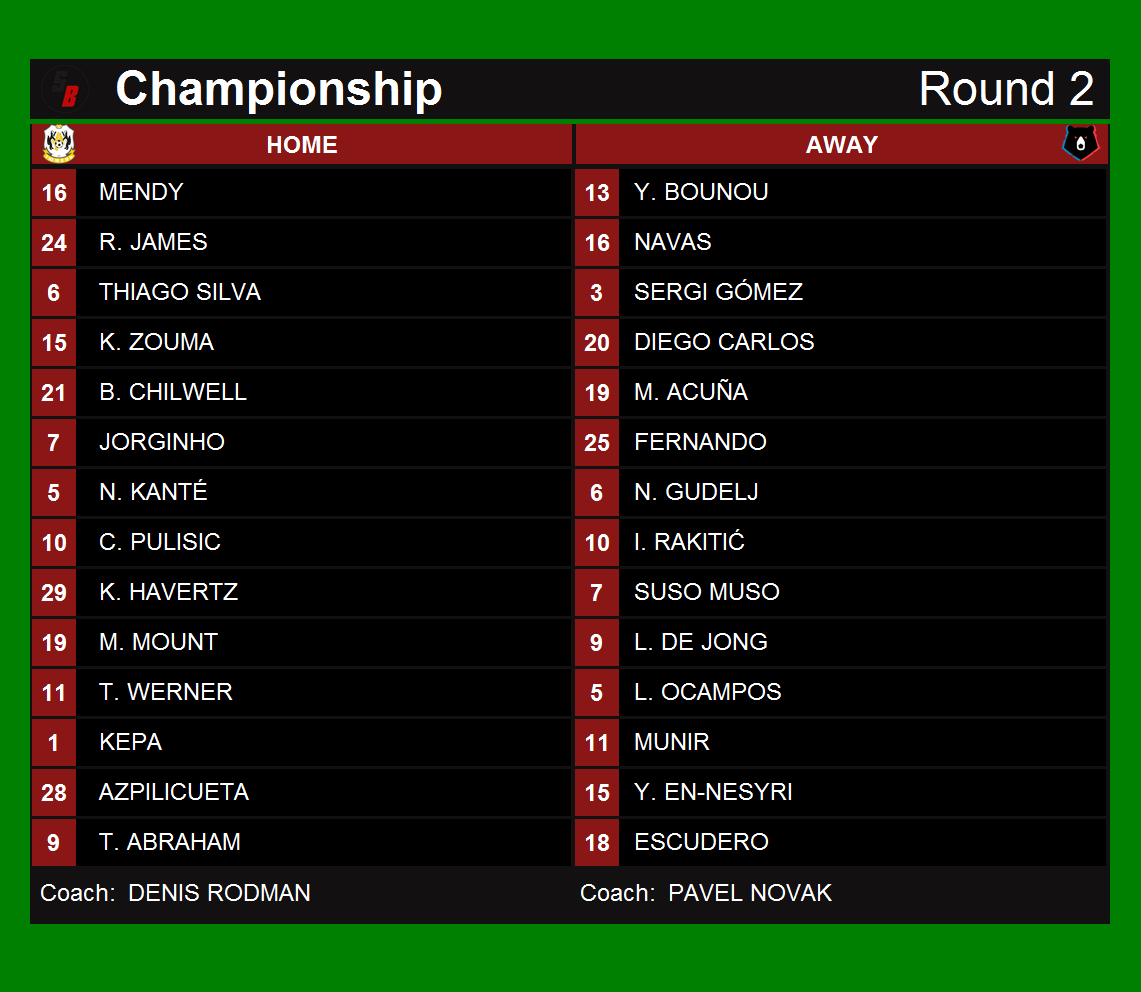 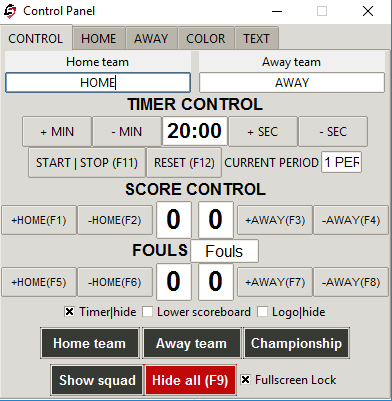 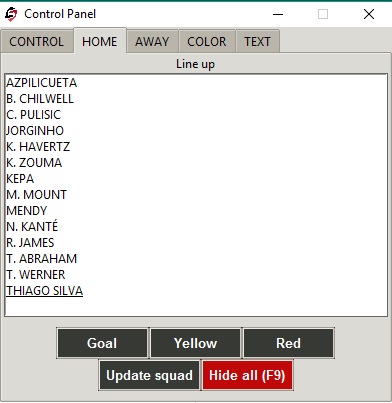 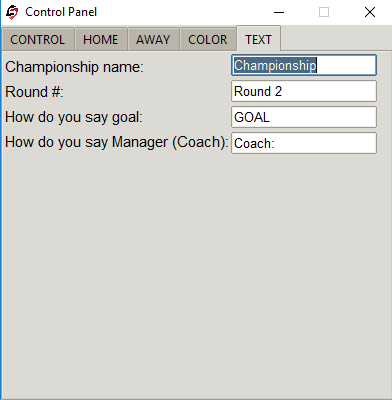 Take a 7-day test-drive of every app you want.

After you download the Software don't forget to request a Demo license.

So next week I plan to post the Basketball.Lite version. So if you have any requests on what should be in the software please be free to write.
Right now there will be Logos for Teams and Sponsor, Full color control, Main timer, fouls indicator (5 circles or maybe smth.else which will change the color), shoot timer. And I need the one who can test and consult me during development. Of course this person will get the free version after it will be posted.

Everybody hi. So I decided to post here a fully functional version of Soccer.Pro.
After you download it, don't forget to request a licence key at https://score-board-app.com/demo-request

Trial version is available for 7 days, so you can play with it, try and decide if its worth 28 Euro )

Also you can find on website Soccer lite and soccer Pro.

Another update came up today. I reduced the lauch time of the Apps, so go to download section and get the latest one ))

So decided to post here a Demo version of a Soccer Pro version.
You can watch the tutorial and try it yourself. There are some restrictions but you can check out if it suits you. The price for the version is 30$.

So the next sport is Futsal. Hope to finish lite version of it this week

In this tutorial, I'll show you how to use Scoreboard App.Soccer PRO. You can purchase the Application at https://score-board-app.com/ Music: https://www.ben...

Dear all, I've been working hard on a new version of Scoreboard and finally, I've made it.
Here is a Promo of the Pro version for soccer


So what can the software do?

The PRO version includes animated graphics. Graphic elements include score, timer, additional time caption, lineup, yellow and red cards, substitutions, the central lower caption of the score with the logos of the teams. Displaying the Competition or League logo next to the timer and in the squads.

The Application uses the «5 seconds» rule. After displaying some titles (for example, goal, yellow card, etc.), the title is automatically hidden after five seconds and the main title appears in the upper left corner. The additional time caption turns on automatically after a user-specified amount of time.

The user has access to the color editing function of the main title (timer, score, teams color, background color). The program will load the user's last color scheme the next time it is launched.

There is also a lite version which is similar what was for free but without bugs and with color control ability.

Next month will be working on Futsal. Suppose that lite version will be available in a week or so, and price will be the same.

You can download demo of lite version on my website. Pro will be available within a week on Russian and English.