Seems like a few of the Vaughn Live servers have been moved/decommissioned. This is making the plugin hang when it pings those servers. The plugin gets stuck on these servers until it times out and defaults them to 9999 ping. Would be nice if the servers that no longer get pinged were fixed/removed.
M

We will be updating our server list once we finish setting up our new Chicago ingest server.
L

MarK said:
We will be updating our server list once we finish setting up our new Chicago ingest server.
Click to expand...

Would there be any chance of getting a server in the state of Tennessee? There are none listed for the mid-south between Chicago, Texas and Virginia. I can't get a good ping from those three because they have such a very high user population, and because of the distance between those states and mine. It would be a dream come true if OBS had a server in Tennessee - please make it so.

Forum Admin
If a server went up in the south, my guess would be Miami, or maybe Atlanta, since those are bigger hubs. It's up to Mark, though.
M

I live in Columbia, TN and get an excellent connection to our Virginia ingest server. Miami isn't ideal for widespread use, which is what we're focusing on at the moment. However, once we're finished with that stage, we'll be setting up specialty ingest servers in various areas, Miami being one.
M

Would be awesome if we could choose which servers to test so it wouldn't test every server for no reason (and takes more time to refresh the ones we want because of it).
D

I'm in Murfreesboro, best server for me is either VA or CHI. You should use those :-P
K

You can edit the services.xconfig in OBS' base directory and remove servers you don't care about/dead servers so you don't have to waste time pinging unimportant or dead servers.
A

Is this can by used in case of streaming to Ustream?
D

This is horribly outdated, use http://www.teamliquid.net/forum/tech-support/326034-jtvping-find-your-best-twitchtv-server instead.
F

Hello,
I am not sure whether what I get/see on my screen is ideal or not... could somebody help me by explaining what I see (apart from ping times) and tell me if this is able to be used as streaming on twitch?
I just wanna make sure the connection is fine so i don't have a lagi stream (i guess it depends on that right?)

I am attaching a jpg of Twitch bandwidth test and obs ping plugin.
also please let me know which is the best server for me to stream to?
if it matters on picking which is the best, I am currently gonna stream from Greece,EU. 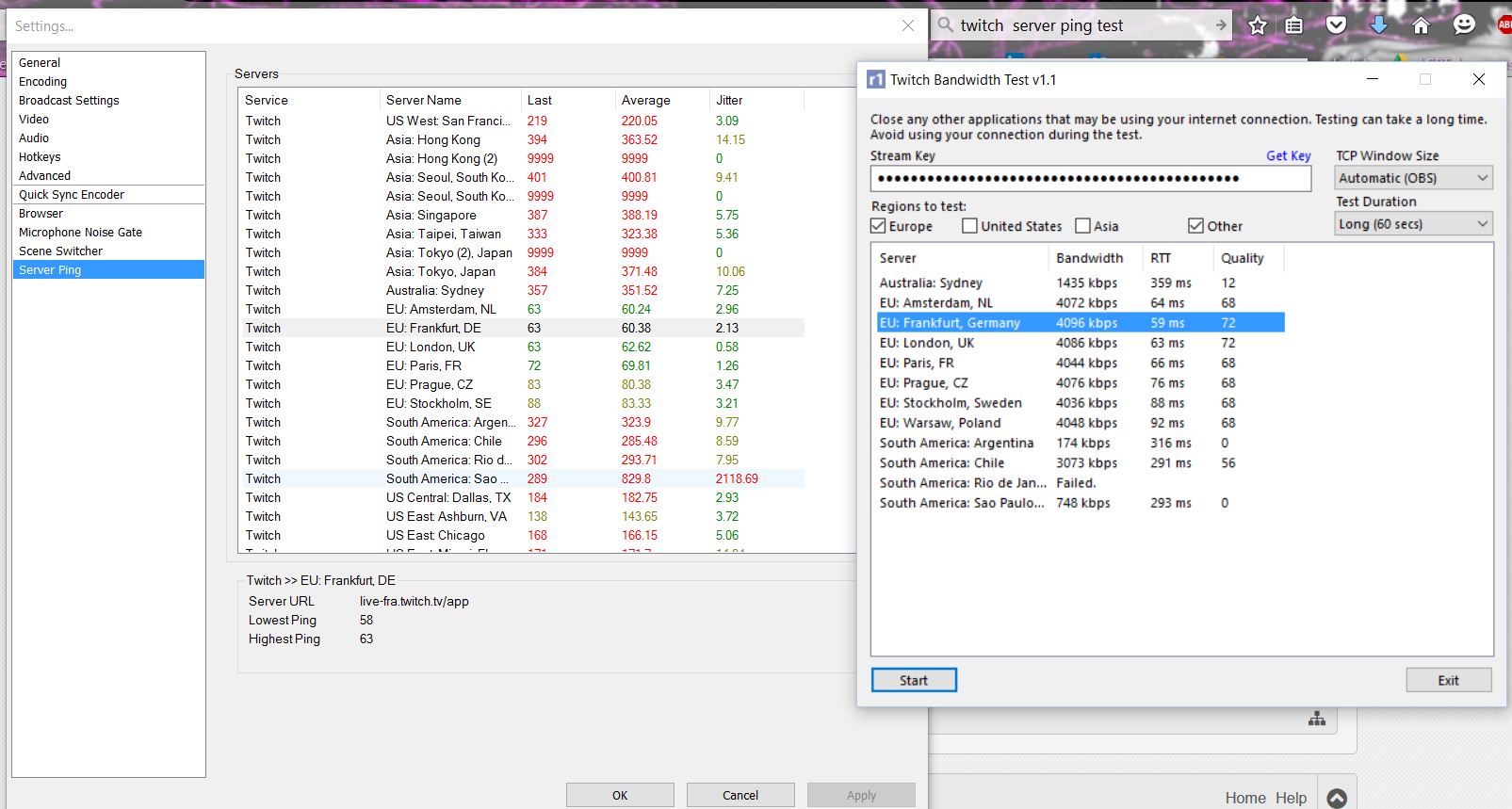