Laggy recording no matter how many guides I go through

My game runs pretty well I'm recording Modded Minecraft but records pretty badly, my game stutters sometimes and my OBS will drop frames even though its ran as administrator.
My Specs-
Cpu: Intel Core i7 9750H 2.60GHz
Ram: 16gb Dual-Channel
Graphics: Intel UHD Graphics 630 and a NVIDIA GeForce GTX 1660 Ti (which OBS won't let me use the NVIDIA one)
Here is my OBS setup and Minecraft I limited to 60 fps already and it's not a big modpack either.

That's depressing. I have the next gen of processor and an NVidia Quadro card.

When you say your game stutters, do you mean the game play as you're using it or the gameplay in the recording? Are you using default VM settings on your Minecraft instance? Outside of OBS, can you force Minecraft to use the Intel GPU and see if you get stutter?

I seem to remember there being power settings in Windows as well where you could turn up the performance (can't find it). Have you mucked in the NVidia Control Panel? I can set OBS to prefer the NVIDIA GPU and I didn't add it to the list manually: 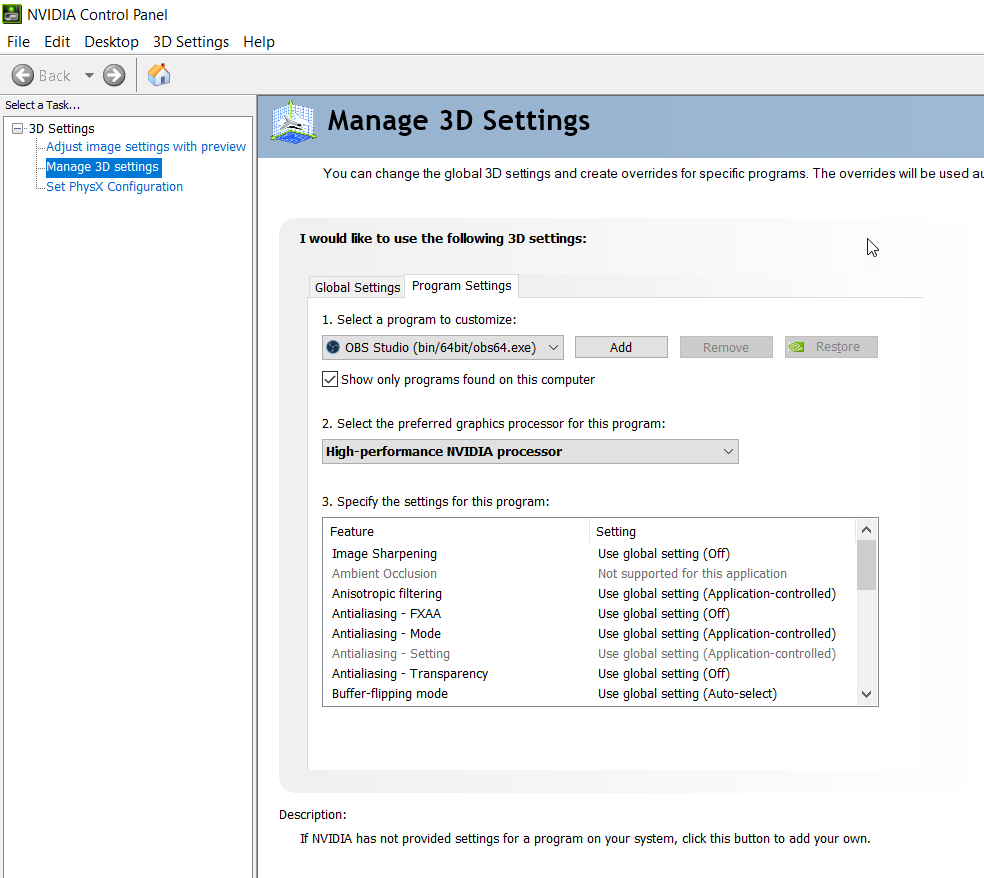 Can you add Minecraft to the list in NVida control panel?

I have a tool called HWinfo64 that allows me to look at the low level sensor readings on the computer. It adds a small hit to performance, but it might let you see a little clearer where the bottle neck is happening?

As an experiment, you could drop your frame rate and see if either issue improves?

OBS (Open Broadcaster Software) is free and open source software for video recording and live streaming. Stream to Twitch, YouTube and many other providers or record your own videos with high quality H264 / AAC encoding.

I have dual monitors so i can monitor my gameplay as im playing, and on the game i run fine normally, but on the obs my mouse stutters and my recording lags. Also I know how to do the windows things but whenever you set it to something besides power saving mode, obs gives a black screen.
You must log in or register to reply here.
Share:
Reddit Pinterest Tumblr WhatsApp Email Share Link
Top