I mostly do DJ streams and I recently found out something weird in multiple OBS recordings:

In the picture the tracks are "in sync" but when I took a screenshot a few kicks before that drop-out:

Both tracks are not in sync. It is like "when you delete the drop-out and move the OBS recording (bottom track) to the right, it will be in sync without a drop-out".

What could cause this strange time-shift and drop-out in the recording from OBS but not in the dedicated mix-recording?
It is one computer that is doing both recordings using the same soundcard.

My signal chain:
DJ Mixer puts out 48kHz S/PDIF into a Focusrite Clarett 4Pre USB.
Soundcard gets clock from external S/PDIF and is locked to it.

In Audacity I selected S/PDIF In and in OBS, too.
Every device is locked to 48kHz and in software everything is set to 48kHz.

I cannot say if it is on stream, too or only in the recording because no viewer is listening so carefully.

Recordings are mkv using the stream-encoder and get re-muxed to mp4 after the stream using the OBS feature.
These audio issues are in the mkv and mp4 recording!

Today I found something on github and I commented: 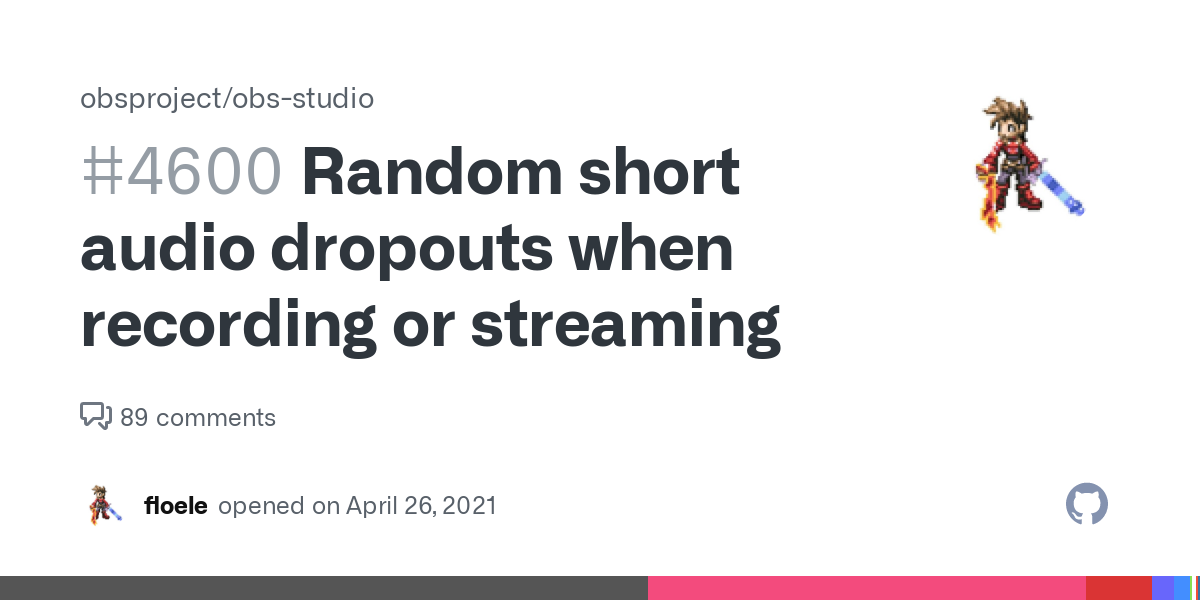 Unfortunately i must confirm. Still using obs 26.1.1 under win10. All sound devices disabled but a steinberg ur-22. External playback of 1khz tone. i7 10th generation nearby idling.
With recording or streaming the same experience: By chance (random) happen such short dropouts. Sometimes once within in a couple of minutes, sometimes two dropouts within 20 seconds or even less. Randomly distributed.
The try/workaround as of user floele at github i find very interesting.
K

And i remember to have seen this a year ago on a completely different machine with obs 26.x too.

By the way: Timeshift... unclear. But the small drops... yes, confirmed.
K

The thing is: Due to the nature of live events in the case of streaming, for instance transmission of church services, people tend to be forgiving alot, especially in the case of ultra-short outages (its almost anticipated these days). But even then a short cut on audio is more distracting then a few lost frames. So ever stable audio wins (and is more important) then stable video for normal broadcast.

And using OBS for 'acting with live-faders' for producing (recording) instead of streaming this is terrible and nasty.
I'd be overhappy if the code-contributing folks working on OBS could fix this soon.

Please upvote or reply to the post on github too

Thank u for posting a reply on github. I have seen, you allready figured out how to upvote hehe
You must log in or register to reply here.
Share:
Reddit Pinterest Tumblr WhatsApp Email Link
Top