Semi-free Loot's Tools: Automate your Streams to the Next Level v2.5.9

Hey there! Darye here!
Today's update doesn't bring too much to the table but is a collection of bug fixes I've been finding with streamers and new users:
That's all for now, I did a Guide for people interested in Gifting Packs with Twitch Channel Points, that also contains how to make Pack-gifting Cards, and you can find it here: Gift Packs with Twitch Channel Points
Until next time,

Hey There! Darye here!
Today we have some bug fixes I've been fixing since the last release. This release does not have the "easier" installation method I talked about, but I'm working on it and some other things to make Loot's Tools even better.
Today's Changelog is as follows:
This fixes some things, I'm working on some new exciting stuff, like the "Cooperative Loot's Tools", so tune in for some new Updates on Discord ( https://discord.io/darye ). If you have any issue, report it on Discord, or on Github.
Until next time,

Hey there! Darye here!
This update was postponed because of exams, but here it is:

Had an idea to install and use Loot's Tools (on Windows) without restarting the pc, I might include it on the next update...
Until next time,

The inability of copying Cards shared with LootsTrading is now fixed, and the Collection Selection (to where the Card is copied) is better, even simpler, and error-proof.

Hey there! Darye here!
Some time ago, LootsTrading and LaTEX were disabled in favor of Loot's Tools UI, incorporated again by a workaround. This workaround, however, made the program twice as big, but today we put Loot's Tools on a diet, getting it to the original size of 50MB.
Other changes made were the inclusion of the "Set Variable" command to, as the name suggests, set variables on the execution of the Card's commands.
Some issues came with the re-enablement of LootsTrading and LaTEX:
A solution for the copying Cards problem will come up soon (I'll try to ).
Until next time,

Hey there! Darye here!
This update is a small one, with some bug fixes and QOL things here and there:
Until next time,

Hey there! Darye here!
I've been working on some things to try and make Loot's Tools' User Experience as good as possible, so here are some bug fixes and added stuff!:
Now EXtensions can have their own pages on Loot's Tools UI, with instantaneous sync with the Console. Great for configs and variables! (Documentation soon!)
I'm thinking about making some videos explaining how to install and set up Loot's Tools, and giving an introduction and some examples too, what do you think?
As always, if any issue is presented, don't hesitate on contacting me or reporting it on the Discord Server or on Github's Issues.
Until next time,

Bug Fixes and some updates: Fixed some quirks of the new Command-system and some changes on the UI.

Hey there! Darye here!
The release of the new Command-system brought with it some bugs and problems, mostly with EXtensions; this mini-update fixes them.
Also, on the UI, there now are, when Enhancing a Card or clicking on it, shortcuts for editing it on the built-in Command Editor, and the button to open the folder, is now on the Editor's page of the Card, on a button that says "Open Card's Folder".
I hope this makes the new system as perfect as it can, but if you find any bugs, feel free to open an issue.
Until next time,

JSON-formatted Commands Update! This is an important one!

Hey there! Darye here!
I might have restructured the entire Commands writing and parsing... ups. ;)
Worry not, I've incorporated retro-compatibility with the old system, so when the old file is read, it makes this new JSON-formatted file.
( NOTE: Old versions of Loot's Tools won't work with the new version of the UI, and vice-versa. )
( NOTE2: RND block and variable setting aren't on this version, it'll be incorporated on the next one along a UI mini-update )

For EXtension-makers
This new file format lets the Commands have more complex arguments, and makes the EXtension-making process easier because each argument passes on its value on the "args" object. You'll need to get the argument with the name you put on the EXtension's info.
Also, now to commandInterpreterExtension, the entire block ( {"data": {"customCommandName": "OBSCHANGESETTINGS", "args": {"source": "1", "configChanged": "2", "config": "3"}}, "type": "custom"}, for example ), passes instead of the old-formatted command.

Documentation will be made soon.
Until the next time,
- Darye

Hey there! Darye here!
Here's an update I wanted for a while, the inclusion of a Card Editor for Loot's Tools, incorporated on the UI.
This would make the learning curve of using Loot's Tools and Enhanced Cards easier on the user. 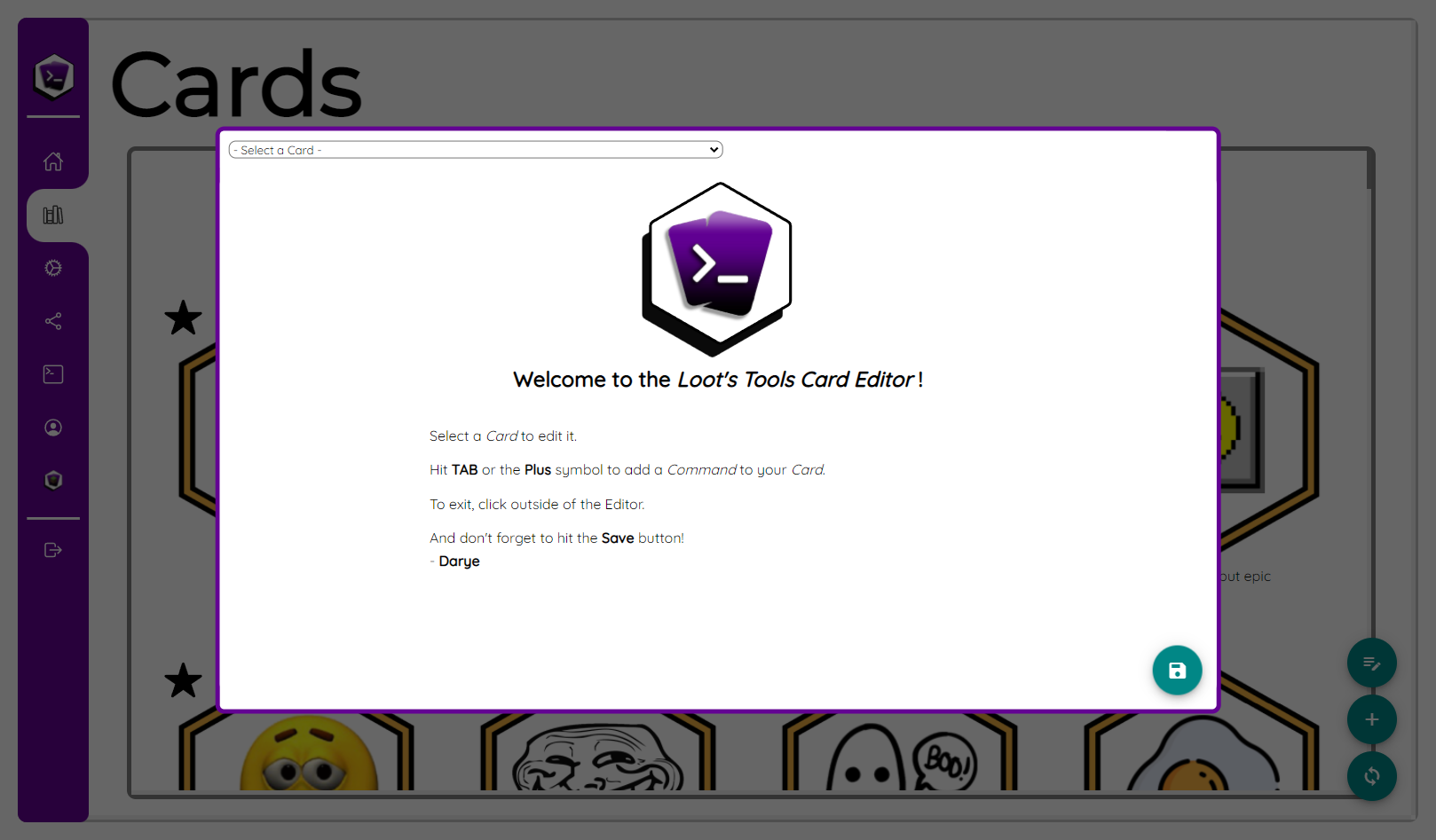 To select and edit a Card, click "- Select a Card -" and choose your Card. 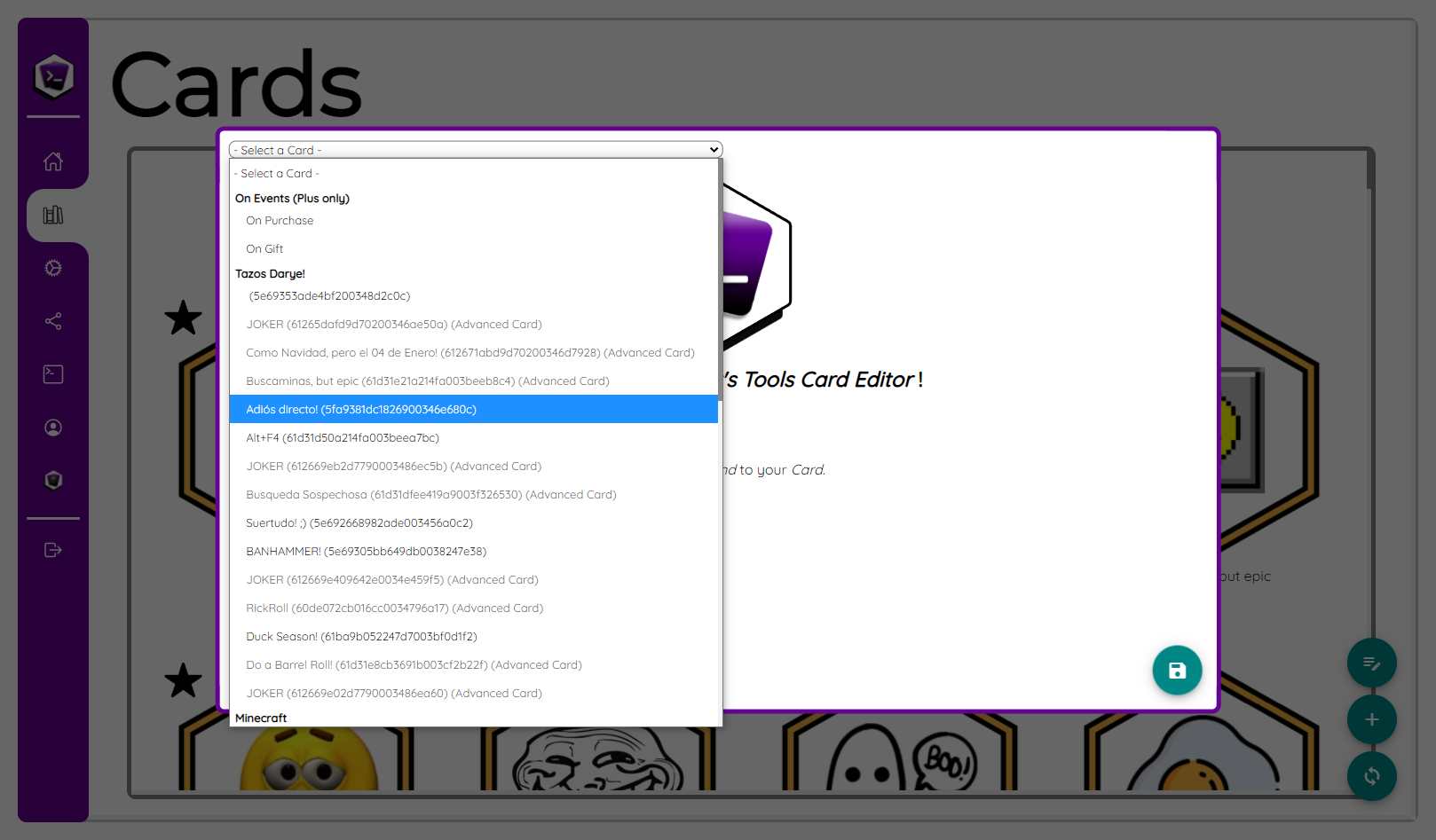 And edit your Card 's Commands! 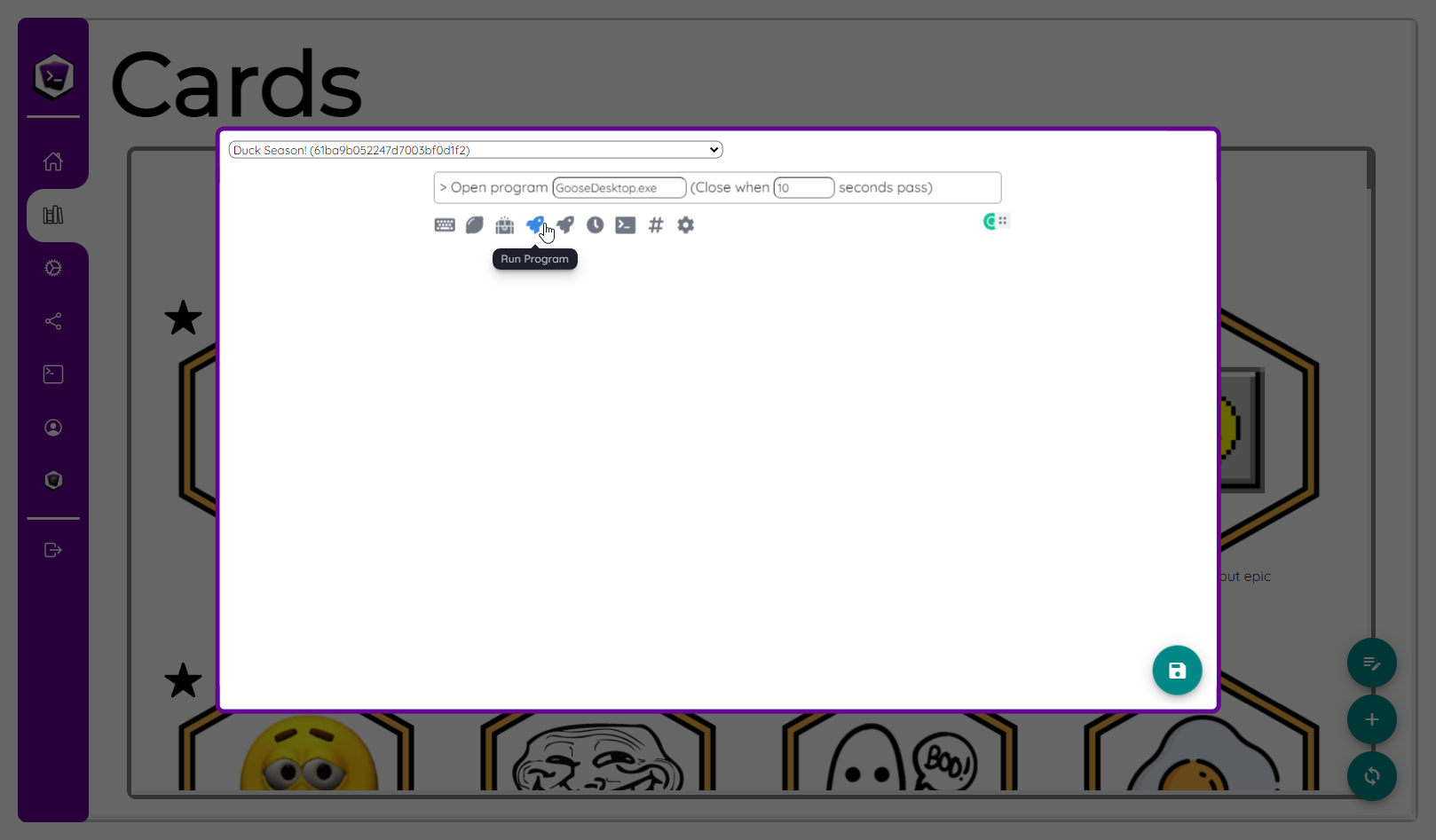 Don't forget to save your progress! ;)

Another thing that someone might have spotted on the last screenshot is a category called "On Events".

These are not Cards, but behave like them when a Pack is purchased or gifted, for example. (Only available for Loot's Tools Plus' Users)
More Events will be added in the future if seen as cool or useful.

As always, if you want to report an issue, give some ideas or get some help, open a new issue here on Github or hit me up on Discord (Darye.#1315) or the Discord Server (DaryeHub).