i'm trying to transfer VHS-C tapes to my computer and it's all going well just, the sudden edges look a bit.. jegged.

would there be a way i can get a form of filtering so that jagged edges don't look so.. jagged? like i've got the output resoloution scaled up to 1280x960 from the 640x480 input.

thanks for the help 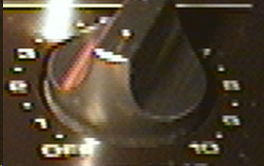 like, sort of a blur type deal so it's.. not so. obvious.

This is what Wikipedia says about the resolution of VHS:

VHS tapes have approximately 3 MHz of video bandwidth and 400 kHz of chroma bandwidth. The luminance (black and white) portion of the video is recorded as a frequency modulated, with a down-converted "color under" chroma (color) signal recorded directly at the baseband. Each helical track contains a single field ('even' or 'odd' field, equivalent to half a frame) encoded as an analog raster scan, similar to analog TV broadcasts. The horizontal resolution is 240 lines per picture height, or about 320 lines across a scan line, and the vertical resolution (the number of scan lines) is the same as the respective analog TV standard (576 for PAL or 486 for NTSC; usually, somewhat fewer scan lines are actually visible due to overscan). In modern-day digital terminology, NTSC VHS is roughly equivalent to 333×480 pixels luma and 40×480 chroma resolutions (333×480 pixels=159,840 pixels or 0.16MP (1/6 of a MegaPixel)).,[34] while PAL VHS offers the equivalent of about 335×576 pixels luma and 40×240 chroma
Click to expand...

If you digitize analog source material, it's best if you create raw footage with the minimum amount of processing as possible. It should be as near to the analog recording as possible. For VHS, to create a 4:3 video, this is 768x576 (PAL) or 640x480 (NTSC). Use one of these resolutions for creating your raw digital material.

Then load this footage in your favorite postprocessing software and try to enhance the quality. Usually, there are numerous filters for postprocessing digitized analog material. Noise suppression, sharpening, deinterlacing, color correction. Especially for NTSC, there are specialized color correction and color repair filters made for NTSC. Don't upscale to higher resolution. Keep the resolution at the original. You will make the quality worse by upscaling.
OBS itself doesn't contain appropriate filters.

Don't try to create a filter setup within OBS and think you are able to record the perfect digitized video directly from tape. While doing so, you will realize that you want to do it again with some better filter settings. Since re-digitizing will take a large amount of time, you will skip this and end with non-optimal video.

So do the raw digitizing without any processing. After that, you have all freedom to postprocess your raw video as often as you need to get the perfect output.
Last edited: Jul 4, 2019
You must log in or register to reply here.
Share:
Reddit Pinterest Tumblr WhatsApp Email Share Link
Top