Even at a low 640p/30fps the fps decreases to a low of 24 and will fluctuate up and down drastically when playing any game really. I have a decent upload speed at around 10mbps(if not more) my CPU usage never gets above 15% and that fluctuates as well . I have a 1080p webcam that i lowered res to 480p/30fps as well. I tried changing bitrate,
even the encoder settings, almost everything already available to me via here or youtube . Ive got a i9-9900kf with a rtx2060 super and 16bg ram. Maybe my low ram??? Internet?? I feel like i should be able to do much much better. I appreciate the help :)
G

recently i was streaming at 720p/30 fps pretty consistently with no issues and then it went to crap.

This makes your downscale nice and smooth, at the cost of GPU load for rendering.

Using the Full color space instead of Partial can increase load and decrease quality, since most users do not have displays that use this color space.

Introduction. For higher compression rate, video encoders usually use methods of representation of each video frame as 3 separate channels: one for luminosity and two for color. This allow to compress color info separately from the luminance...

As soon as you start your stream, these errors occur:

Is the USB device you've got connected a capture card, or a webcam?

If this is a capture device and you're using this as a fullscreen source, then there's really no reason to have your canvas resolution so large-- it should be as large as this source.

If this is a webcam, I'm not sure what's going on-- these errors seem to indicate that the video feed coming from this device is corrupt and can't be decoded, so either it's not compatible with the property settings you've given it, or something else is wrong.

And there's the rendering lag, which could be caused by a combination of the 4k canvas resolution, and possibly running the OBS window on a high refresh rate display, causing the preview to use more GPU.

There are 2 things that stand out.

You're recording at 28fps. Don't. Use either 30 or 60, never anything in between. 28 does not fit evenly into any standard framerate, and will always result in jittery motion.

Using the Full color space instead of Partial can increase load and decrease quality, since most users do not have displays that use this color space.
Click to expand...

As far as I know, the reason not correct. Load increase and quality decrease with encoding, yes. But as far as I know, all computer monitors display full color range. Windows desktop and all locally generated graphics is seen in full color range. May differ if you use a TV for computer display, but native computer displays use full.
Having said this, the common workflow for video material distribution uses partial color space for data compression. All video encoders, transmitters and players assume partial color space. In this path, material is usually converted to partial. If a streaming service is transcoding material (i. e. offering different resolutions for a stream), it is usually converted to partial, regardless of the source. Media players assume partial as default and may misbehave on full material by displaying wrong/distorted colors - the opposite of what is expected with full.

So if you encode for streaming, use partial. It saves bandwidth, so the quality increases more with that than the quality decreases due to removing a few colors.

Partial is the default. A lot of people change that because they think Full sounds better than Partial, and then want to know why their YouTube footage looks bad.

My understanding is that if colors appear washed out, it is due to broken conversion between partial and full. Not the inability of a conversion between the spaces. If a display on a computer uses partial color space, and the video driver knows this, it converts any full material to partial and the display displays this perfectly fine. There is a well-defined conversion between full->partial, and partial->full as well, so if a converter knows which format source and destination is, there is a perfect conversion in both directions. Never washed out colors.

If the video driver thinks it has a full color range monitor connected, but the monitor is actually partial, wrong colors will be the result. And vice versa. For example, I have a native computer monitor that only processes full color space. Everything looks correct according to the color space test charts. In Nvidia control panel, I find a setting to activate "partial" output. It's the opened drop-down list at the bottom, the choices say "Full" and "Partial": 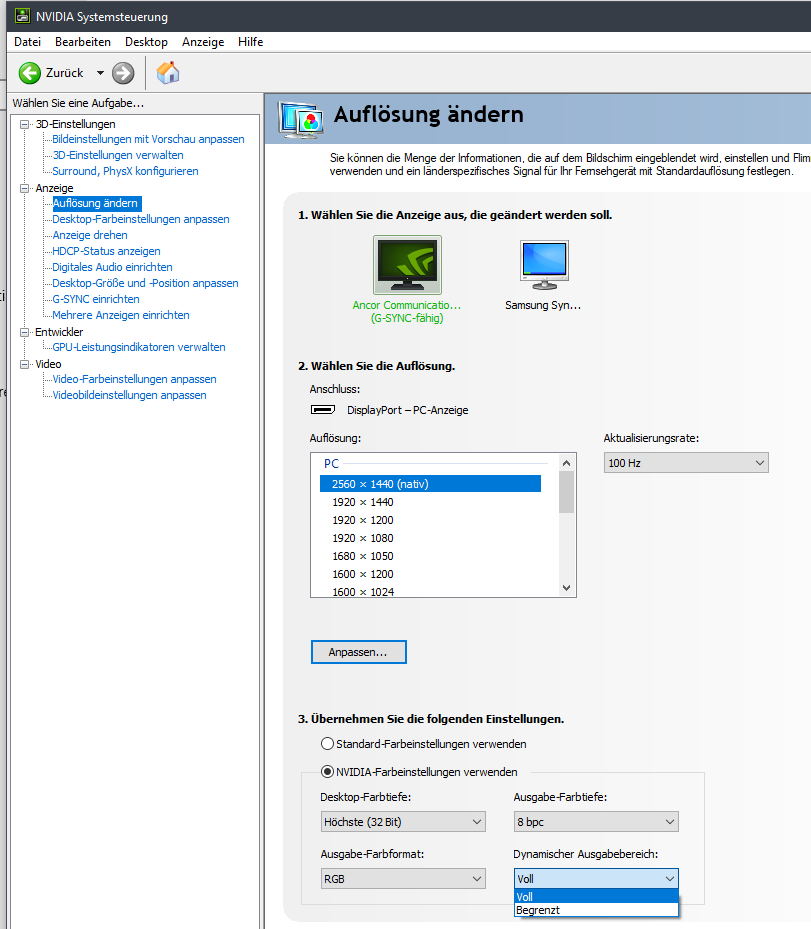 Now, if I choose Begrenzt (Partial), the colors of my desktop (including background picture) actually turns washed out. The explanation is it's because the monitor always assumes the signal "full" color range, but it is actually given "partial" output. The driver converts to partial, but the monitor uses this as full and don't convert back, so the colors become washed out.

Usually, you don't need to care about all this. Usually, systems configure themselves correctly. Usually, you just plug in a monitor and it is driven correctly. If you change something manually, it might become a source of confusion, because not every part in the video production+display pipeline is able to automatically detect the color space property of what it is receiving and what it is outputting. It assumes defaults instead. This includes the Full/Partial setting of OBS: Usually it's best to just leave it at its default (Partial).

I am honestly beginning to wonder why I am bothering with this advice, so maybe I'll give it up.

Before that, let me ask this:

If you run a channel with hundreds, or maybe thousands, or maybe millions of subscribers or viewers:

How do you ensure all of them have a properly configured, working as intended, conversion from the less common color space to the more common one?

When they say, "videos on X's channel look fine, but the one on yours don't, so it's your setup and not mine" how do you respond?

How many viewers seeing the result of the incorrect, improper conversion are worth the improved visual fidelity of the experience who actually have a display that runs in that color space-- since that number is lower than the number of people who don't actually have that, but are just looking at the correct Full > Partial conversion?

And given that OBS users are famously trying to push for higher framerates, slower compression speeds, and better visual quality, which of those targets should they sacrifice a tiny bit in order to use Full instead of Partial?
Last edited: Feb 15, 2020
You must log in or register to reply here.
Share:
Reddit Pinterest Tumblr WhatsApp Email Link
Top