For a video demo, see here:

The NAB 2019 NAB SRT panel can be watched here: https://www.haivision.com/resources/webinars/broadcast-panel. (Hey Haivision, friendly suggestion: it'd be nice to have this vid posted on YouTube instead of having to enter personal info! :P )

There is also a white paper which can be found here
or there. The API is fully documented on GitHub.
A very good source of info is the SRT Cookbook.

Can SRT be used with Twitch or my favorite service?

Short answer: NO (or not yet?)

Long answer: None of the main streaming services support the SRT protocol for ingest. Most still use RTMP (Twitch, YouTube, Facebook...). (Mixer though relies on WebRTC through its proprietary FTL protocol which OBS already supports). If you're using exclusively these services, no need to read further.

At this stage of the adoption of SRT protocol, you'll have to be technically inclined if you want to use SRT. If you are able to set up your own streaming server, maybe redirecting your streams to the main services like Twitch or YouTube and are interested in achieving low-latency with improved network resilience, read on.

The other category of users who could potentially be interested belong obviously to the professional broadcast industry. This wiki entry can be considered as fairly advanced in that it requires access to a server and being able to set it up.

The configuration of OBS itself ranges from easy to medium in terms of difficulty. The server setup is more challenging since it requires system/network admin knowledge.

Additionally, though it is technically not a server, FFmpeg can be used in listener mode to ingest an SRT stream. It won't be able to serve the stream as a real genuine server would do. But it could be used to transmux to RTMP and route to nginx-rtmp for instance, which can then handle the ingest to Twitch/YouTube/Facebook/etc.
ex: ffmpeg -i srt://IP:port?mode=listener -c copy -f flv rtmp://IP:1935/app/streamName.
In the same way srt-live-transmit can be used to listen to an srt (or udp) stream and relay to a final srt URL.
ex: srt-live-transmit srt://IPsrc:port srt://IPdest:port.

The following players can be used to watch an SRT stream :

This could be useful to two pc setups (although NDI is probably a more common solution).
In a Media Source, uncheck 'Local File'.
For 'Input', enter the srt URL. If the stream is received from a server (in listemer mode), the srt connexion will be in mode=caller (which is the default one so the option can be omitted). If however the stream is received straight from an encoder in caller mode, add the mode=listener to the URL (see screenshot).
For 'Input Format', enter mpegts.

Download VLC 3.0 here or VLC 4.0 here (warning: this is the development version of VLC).
If you just want to test without disturbing your current VLC install, we advise you to download a portable install (zip). 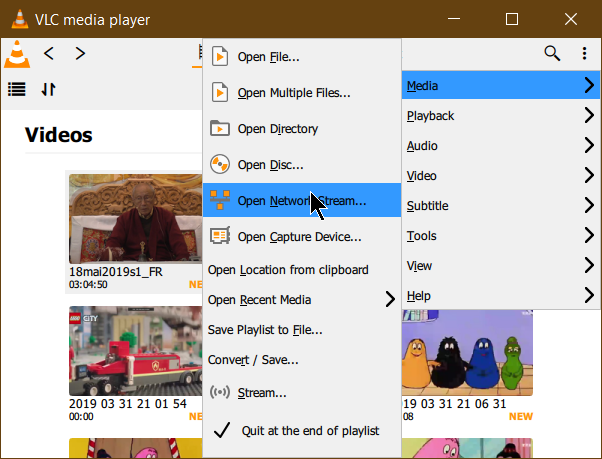 enter the SRT IP which has the form srt://IP:port. 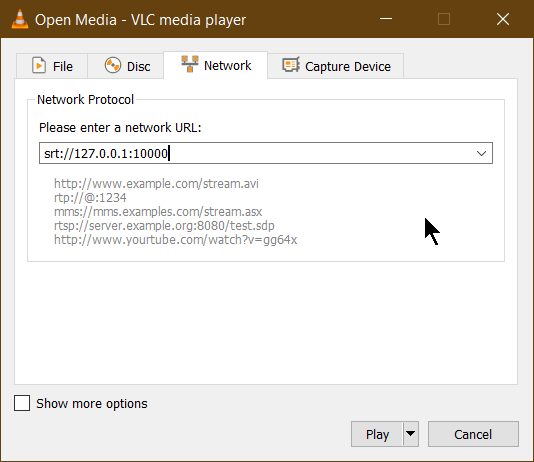 It is required that ffplay be compiled with libsrt support. To the extent of our knowledge, there does not seem to be any such binary widely available, although there are no license constraints.

How to set up OBS Studio

There are two ways of setting up OBS Studio to connect to a server. The first is simpler but gives less options at the moment. The second is a bit more difficult to setup but gives more fine tuning capabilities (muxer options for instance are available). Note: ffmpeg may not come with SRT support in older distributions of Linux, so check the repository sources to ensure that ffmpeg comes with libsrt support, as there is no easy way of getting OBS Studio to reference a custom build of ffmpeg.

Note that while the discussion focuses on SRT protocol, UDP or TCP can also be used instead.

Works fine with: Wowza, Nimble server, vlc, ffmpeg, srt live server, Makito X decoder. (those are only the platforms we tested at obsproject; most should work fine.) 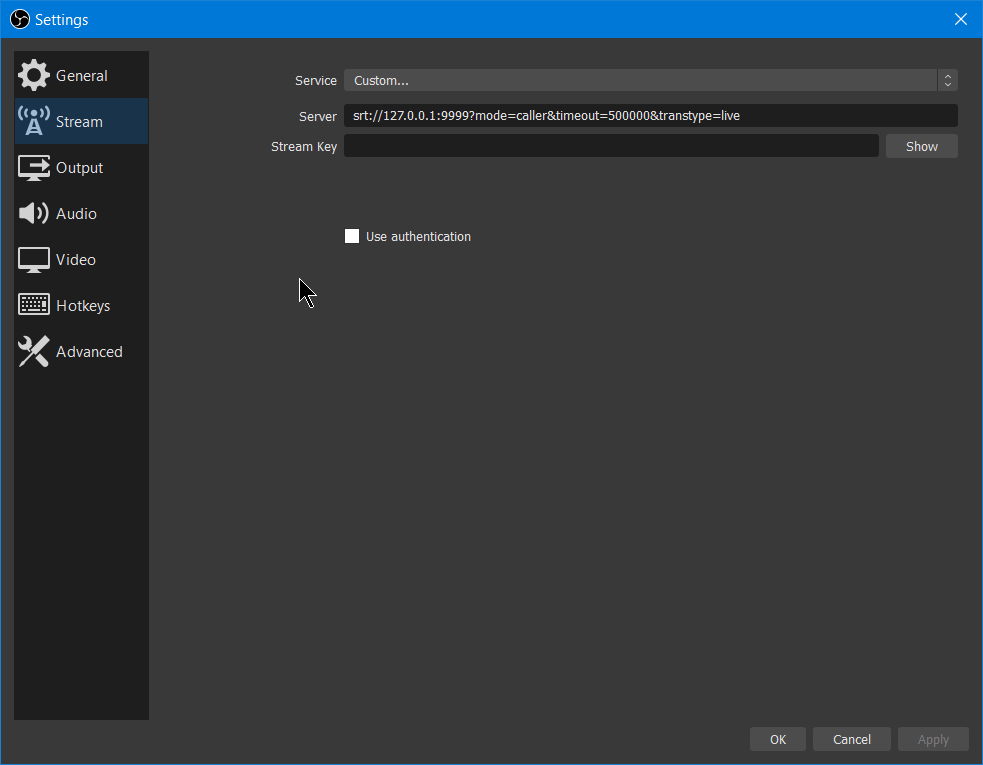 OBS Studio will accept options in the syntax: srt://IP:port?option1=value1&option2=value2. The full list of options is those supported by FFmpeg: http://ffmpeg.org/ffmpeg-protocols.html#srt.

Another sometimes required option is the mode, which can be caller, listener or rendez-vous. caller opens client connection. listener starts server to listen for incoming connections. rendezvous use Rendez-Vous connection mode which is a bi-directional link where the first to initiate handshake is considered caller. The default value is caller and usually need not be set for OBS Studio since it'll be in caller mode normally. 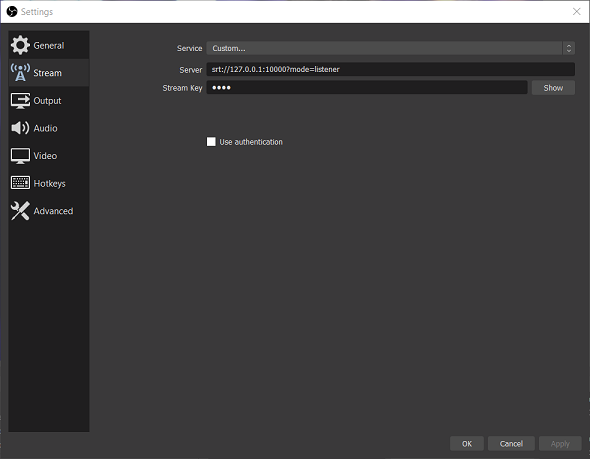 This option is a bit more complicated. It relies on the Advanced: Custom FFmpeg Recording output.
Works fine with: Wowza, Nimble server, vlc, ffmpeg, srt live server (those are only the platforms we tested at obsproject; most should work fine). Doesn't work well with Makito X decoder from Haivision.

Note that several audio tracks can be selected. They can be identified on the ingest server side by what is called a PID. On default value, the video track has pid 0x100 (=256), and the other audio tracks have pid 0x101 etc. If you need to change the pid of your tracks, use the muxer option MPEGTS_start_pid in 7. 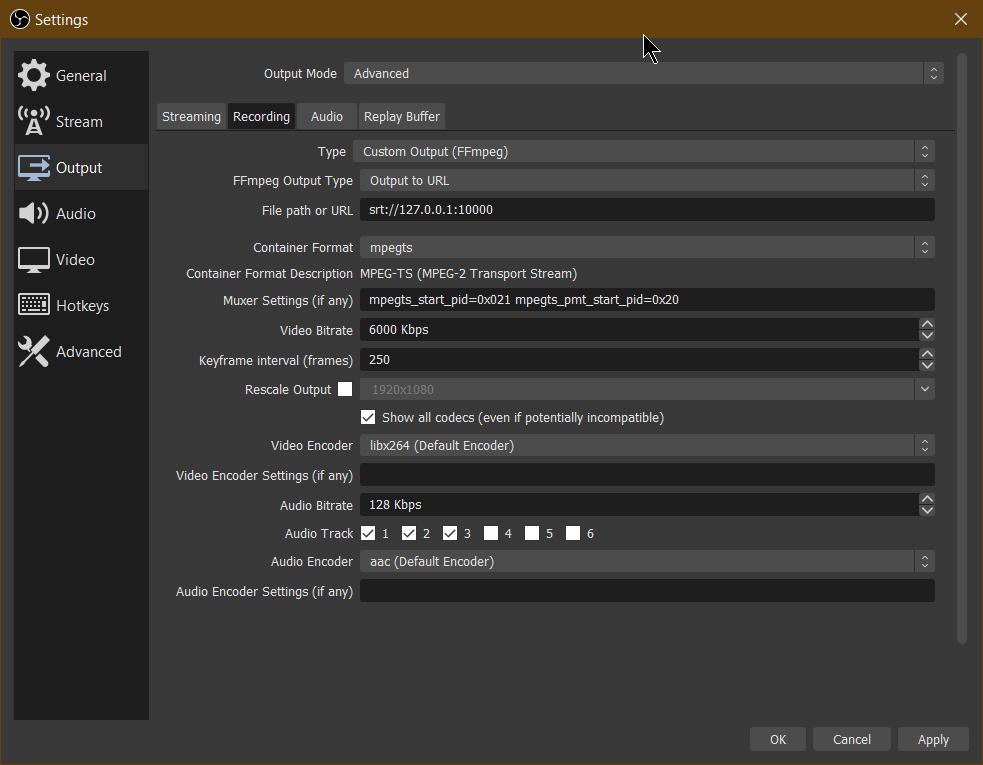 Known issues:
There can be issues with Makito X Decoder. (under investigation) Use Option 1 for Makito X decoder.

Pros/Cons in comparison with Option 1:

One can use ffmpeg to easily relay an input SRT stream to a standard RTMP compatible with Twitch (or even other streaming services provider like YouTube ou Facebook). This is especially interesting if you have a bad and unstable connection between OBS and the service. Note that the server you use should have a fast and reliable connection to benefit from this (but this is usually the case). Also note that using a server to proxy stream consumes a lot of bandwidth (consider twice as much as the bandwidth of your video stream) and this can be expensive on some providers like Amazon, GCS or Digital Ocean (it doesn't need a fast CPU though, it's only receiving, rewraping for RTMP and sending).
This approach has the advantage of being really easy to setup on OBS's side if you prepare a server for someone else.
For example the following command can be used on the server:

In this command you can change:

On OBS, you just need to configure your stream settings to "Custom", and specify your server with this template:
srt://ipofyourserver:4444
You can leave the stream key empty, you don't need it.

Run the ffmpeg command you saw above, it will wait indefinitely for an input stream, and automatically stop at the end of the stream. I leave you the choice of managing the restart with systemd or in a Docker container!