As the title says, I've been streaming with these settings for over a year now on Twitch, and haven't had any problems with it. But since a week and a half ago, I started getting dropped frames. Sometimes it trickles in and is lower than 1% because of that. But sometimes, I suddenly get 30+%. I've tried lowering the bitrate, doesn't help. Tried a faster preset, and also didn't help. I tried changing ingest servers, and didn't work either. Even tried a test stream on Youtube, and I was still getting dropped frames. I reboot the PC, and for an hour or two, I don't get dropped frames, but after a while, I start getting them again.

I tried the Twitch Bandwidth Tester, and got these results:
I originally connected to the Toronto, Canada server, because that's the closest one to me. 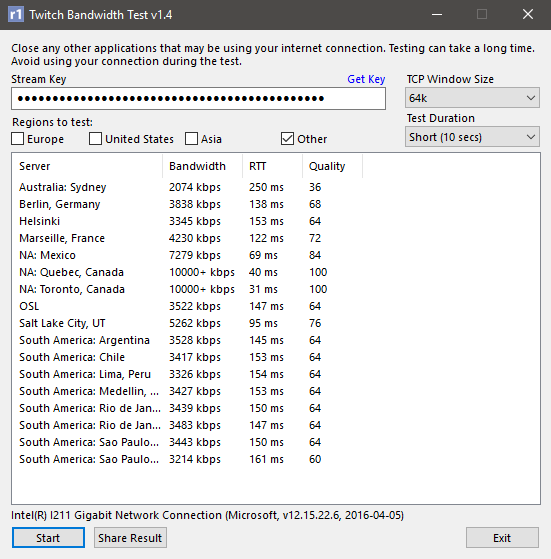 I've since changed to the Chicago server when this all started. 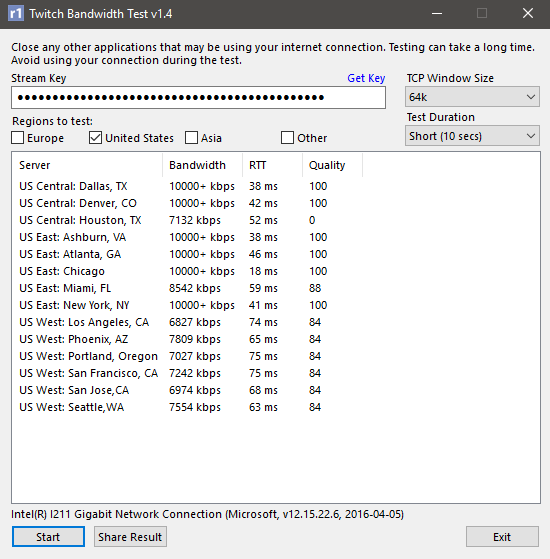 I've even tried Streamlabs OBS, and the results are pretty much the same. Starting to think that it's my router or something, but can't figure out what it might be. I've even already reset the router/modem to factory settings. But after a day the problem persisted. What exactly should I be looking out for in terms of that?

And if you run the twitchtest with a medium duration instead of short?
A

Harold said:
And if you run the twitchtest with a medium duration instead of short?
Click to expand...

Haven't gonna try that now.
A

Harold said:
And if you run the twitchtest with a medium duration instead of short?
Click to expand... 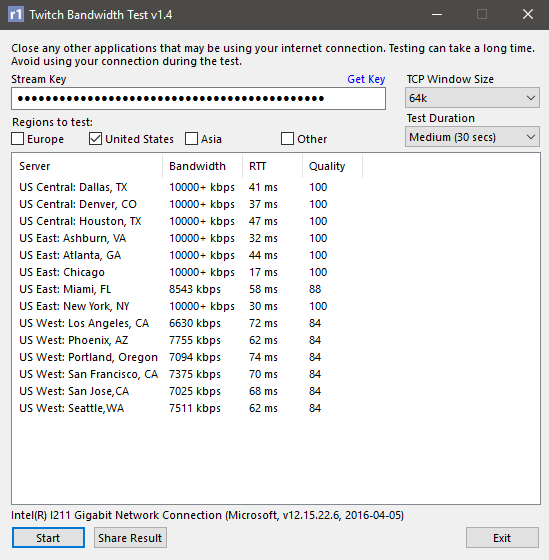 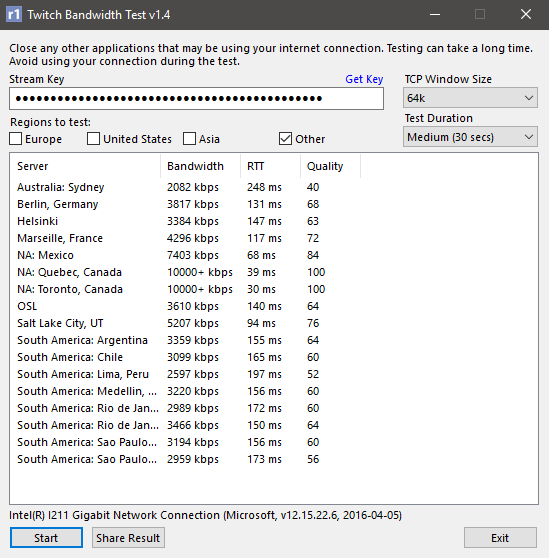 Pretty much the same thing happens.

You should leave the level at auto and not set it manually. The encoder is smart enough to choose the right one.

Harold said:
You should leave the level at auto and not set it manually. The encoder is smart enough to choose the right one.

But I've had times where I get little to no drop frames now, but have problems later. There are times that I get them during times that I got none before too.

Doing speed tests show I'm getting speeds I'm supposed to, so I already know what my ISP's gonna say if I contact them.

Will be testing throughout the night, see if I run into any problems.
A

Tried streaming tonight, was fine at the start. About an hour and 50 minutes, with 600 dropped frames. After that, it steadily kept going up, was at 3330 dropped frames in an hour.

So, so far what I've done to troubleshoot:
Changing Servers
Lowering Bitrate
Definitely Streaming through Ethernet
Tried a test stream on Youtube
Firewall's not blocking anything
Antivirus not blocking anything it shouldn't be
Don't have bundled network software
Speed Test shows I'm getting the right speeds, same as before I started having this issue at all.
Network Adapter Driver is up-to-date
New Network Code was on
Bind to IP was on default
I'm plugged directly to the router modem and getting the right speed
Because of that, ISP is gonna say nothing's wrong.

Think it may have been solved. For some reason, under the Network Adapter's Power Management options, the box for "Allow Windows to shut off device to save power" was ticked on. I remember turning that off before. So far, tests have given no dropped frames since. Still continuing tests.
You must log in or register to reply here.
Share:
Reddit Pinterest Tumblr WhatsApp Email Share Link
Top