Tips and tricks for Lua scripts

Hey @John_ , sorry for the delay, I was on a different project the past 3 weeks. Yes, in fact there is such a lot to do with these typemaps! Help is welcome!

First of all, obviously, is to have a compiling environment. I'm doing everything in Windows, with CMake, VSCode as IDE, Visual Studio Community 2019 only as compiler (my settings of CMake in VS2019 never worked properly), plus the QT and SWIG dependencies delivered as archives.

Second is to understand the concept of "typemap" by SWIG: typemaps in general of different kinds, then for Python and for Lua.

It is a lot of documentation! And it is very challenging to understand because it is about code generation in a mix of C, Python/Lua plus the typemap definition syntax.

My very basic understanding is that:

Finally, with that in mind (it is a lot to learn at the beginning, but once the basic typemap concept is understood, the rest seems logical), tweaking OBS bindings is done in just a few lines of code in the .i files.

For some reason, the typemap feature was never used in OBS and for example the frontend functions, which need non-classical type conversions, were written manually out of the SWIG scope. As a result, these functions do not appear in the obspython.py file (and do not appear if you are trying to use auto-completion).

At the end, the remaining work is to:
My implementation of the bindings for gs_stagesurface_map works somehow, but is not free of memory leaks. Anyway the use is limited because the transfer of data back to RAM can be slow depending on the graphic card.

I would better look at the bindings for accessing the buffer of a texture_data member of the gs_image_file structure. In my opinion this is really a missing feature in OBS scripting.

Hi, I am really new to LUA, I would like to add a checkbox to enable or disable the reading of a file and a reset button to remove the selected path. I have been unable to do so. How should I do it?

An example of how it should look: 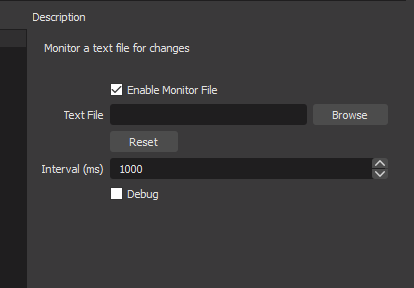 Thanks in advance. Excellent work! ;)

Hello, I would suggest the Source Shake tutorial for an introduction to scripting and an example of editable properties.

There is an example of a button with a callback function in the same tutorial.
U

I did post about LuaJIT FFI usage in the past Turns out it is not thread safe. The volmeter thread callback, for some reason, seg faults on GNU/Linux and that also true for Microsoft Windows. Is there a way to construct a C thread callback which calls Lua often and not crashes OBS Studio ? It just works on Python.
I

I would really like to see a script example for creating a dock window to put UI elements into. Some scripts really need their own window, rather than having to display next to the list of scripts. Would be nice to be able to create a dock window, put buttons and other UI controls in there so the user can put the UI for the script where they want.
A

Thank you all for these write ups they are super helpful! I do have a question though, how would I go about moving a source by 10 pixels. Essentially I would like to press a hotkey and it moves a source 10 pixels to the left.

autoharplive said:
Thank you all for these write ups they are super helpful! I do have a question though, how would I go about moving a source by 10 pixels. Essentially I would like to press a hotkey and it moves a source 10 pixels to the left.
Click to expand...

Hello, I started working on an import overlay script. I wanted to know if is possible and how it's done. How can I create a function to create a nested scene, look through the scenes I have, and import that X scene to the Y scene. Thank you! bfxdev
I

This creates scene item but it doesn't pick another scene it creates a new one with this name. If someone could help me thank you!
You must log in or register to reply here.
Share:
Reddit Pinterest Tumblr WhatsApp Email Share Link
Top