I'm trying to redirect the output of OBS Studio to Skype, Hangout and all the softwares that get video stream from V4L devices.

I found this project that looks like the ideal solution for my problem, a kernel module that allow me to create a V4L loopback device which can be subsequently fed with the video stream i want to show.

The examples for using the module are pretty simple, in fact by following them everything works fine, however with OBS as producer nothing works :(.

I'm using this settings, outputting a rawvideo (like the examples) to the V4L device i created (/dev/video1)

Every time i click "Start Recording" i get this

Code:
I'm thinking about a different approach, by passing the stream to a middleman, with a named pipe or something else
OBS -> [ffmpeg?/gstreamer?] -> V4L2loopback -> consumer

Maybe OBS has no write permissions to /dev/video1?

i have write permission on any /dev/video* device, with ffmpeg for example i can write without any problems
M

Same here, trying to use obs with v4l2loopback as the output, but it always fails....
R

One way I was able to get it to work was to save to a url in the settings, and then run ffmpeg externally to pump it into the loopback device.

For example, I set it to send to udp://localhost:55555 with (just picking one) an mpeg2 transport stream.

The in a terminal, I run:


Code:
And it appears to work. The problem is we're adding extra layers of encoding and decoding. If we could get obs-studio to output into the v4l2 format natively and pump the pixels into /dev/videoX, we're good to go. I suspect it's possible given the use of ffmpeg's libraries, but that's not something I'd know for sure.

Unfortunately, the only time I need this is when I'm not hosting the video myself, and tomorrow is the first and last time I'm likely to do it, so I won't be poking around much after this. But that's my findings so far. If I learn anything else, I'll follow up.

A possibility to stream to the v4l2loopback looks like a must for this kind of software on linux.

Code:
Hope this helps. I can patch and test on my side if needed. With the version from github I get exactly the same issue: receive_audio warning and then stopping. I should probably file a bug eventually with some more debug information.

Interesting,
if I create a test sink:
v4l2loopback-ctl set-caps "video/x-raw,width=640,height=480" /dev/video1
I can start recording to my loopback device, but the picture is corrupted (mix of the gstreamer test and my scene).

But OBS alway shows an error like "Cannot connect to Streaming Server"
Here a Part of the log:

Here is my command: 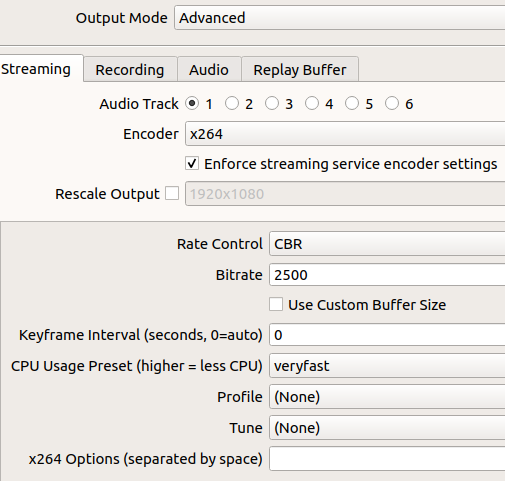 This adds an unfortunate 4 seconds delay on my computer though. I'm looking for how to reduce the delay.

For the Tune option try zerolatency.

So yesterday I was playing with v4l2loopback again (since ages ago). Because everybody is using videochat services and we need to make things a bit more interesting ;)

The only setup that works fairly reliably for me right now is if I run an nginx-rtmp instance, stream to that from OBS and then grab this stream with ffmpeg like:

In terms of functionality it would of course be great of OBS can stream directly to a v4l2loopback device.
A custom output type with ffmpeg that adds this type would be ideal I think.

I haven't dived into OBS code yet (have compiled it from scratch before), but I'll have a look at how difficult it will be to add this.

I came acros https://github.com/CatxFish/obs-v4l2sink/ - have you tried this? Seems to do what you want...

Hey, interesting. I did not find this and I will have a look to see if this does things like we want :)

Would say: does not work as expected.

After compiling both obs and the plugin from scratch and playing around a bit with settings it's working pretty well on 720p.
Thnx for the tip @Leadpumper :)

dreamer said:
After compiling both obs and the plugin from scratch and playing around a bit with settings it's working pretty well on 720p.
Thnx for the tip @Leadpumper :)
Click to expand...

Could you share settings? I've got obs running with the plugin, started the loopback:
modprobe v4l2loopback
but I'm struggling with the caps settings. What's the right combination of something like:
v4l2loopback-ctl set-caps "video/x-raw,format=(fourcc)YUV2,width=640,height=480" /dev/video2
and obs output settings? 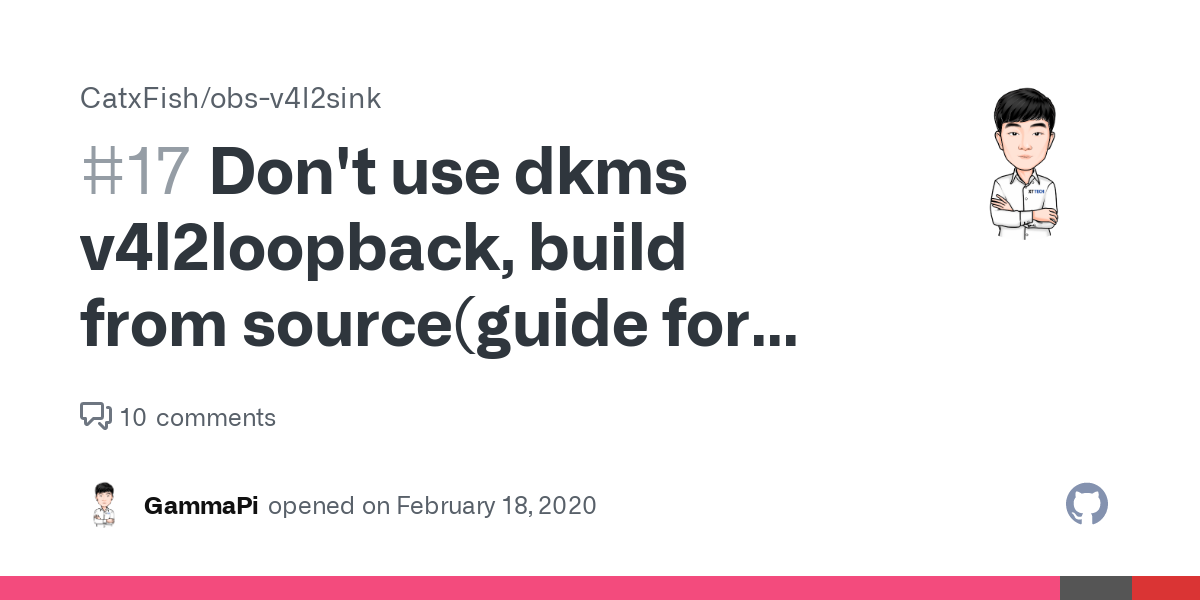 thanks @dreamer, that helped - I can view my loopback video in vlc now with OBS effects using
vlc v4l2:///dev/video10
Although I get errors when I try to use Cheese/guvcview etc. or Chime in a browser. I'll try building everything from source :)

Yep, got it working. I had to remove my browser permissions for sharing video on Chime and then re-allow, now sharing my OBS Cam. Thanks for the help :)

There's a suggestion to add a virtual-camera feature into the Linux version of OBS:
https://ideas.obsproject.com/posts/598/built-in-support-for-v4l-loopback-v4l2loopback-on-linux

and also: (for all OS)
https://ideas.obsproject.com/posts/8/allow-obs-to-send-video-output-to-other-applications