I am trying to set up my system for game streaming on dual PC. I connected them via ETHERNET cable. I couldn't find crossover cable, but I found a crossover adapter, which seems to work perfectly. So the connection is stable.
But, I have an issue with the PC that I'm running the game and OBS on. I'm running the stream on GPU, since I want to keep the CPU for the game. Video quality is good, everything is great.
EXCEPT, while the stream is running, after about 20-30 minutes the bitrate on first PC(game PC) goes to 0 kb/s and the bitrate bar goes red from green. At this very point I'm streaming a black screen instead of a game, because the first PC(game PC) is sending nothing to the second PC(stream PC).
I have no idea how to fix this. I've tried various things but nothing works. I've tried tinkering about on settings and stuff, but nothing seems to keep this stable.

My gaming PC is i5-7700 3.4ghz cpu, 16gb ram and Radeon RX 480 8gb gpu and on this one I'm running the game, OBS and webcam, while my streaming PC is a i7-4770 3.4ghz cpu, 16gb ram, Nvidia GeForce GTX 970 4gb gpu and here I'm running the streaming towards the platform, VLC which captures the gaming PC stream, music and have various other web pages open on a regular basis.

Gaming PC should be good enough for what I'm trying to stream. Heck, it goes like this even while streaming Hearthstone.

Do you think it's the GPU that can't handle the stress on gaming PC? Could it be the webcam that eats up from GPU capacity and that makes OBS' bitrate go to 0kb/s? On gaming PC my bitrate in OBS is set at 40000, based on the info found on internet.

Also, I have a gigabit internet connect, so for what matters, the internet could not be the issue here.

Can anyone please help me with this?

It sounds like you may have reinvented the wheel here, and I'm not sure if that is contributing to the problem you're having.

For a two PC setup without a capture card, the usual solution would be to use NDI.

The gaming PC would run your game, and the 2nd PC would run your stream. NDI can generate a lot of bandwidth, but if both your PCs are connected to a gigabit switch and their NICs support gigabit ethernet, this should be fine. Gigabit ethernet can support multiple NDI streams on it and your setup would only involve one. There shouldn't be any need whatsoever for a crossover cable or to directly connect the machines; your network should easily be able to handle sending the NDI feed between the PCs and then also sending your live stream out to the Internet without any problem.

It sounds like instead of using NDI, on your gaming PC you're using a custom FFMpeg setting to create a UDP stream that you're sending over the crossover cable, then picking that up in VLC and capturing that as a source in OBS. I'm sure that setup works, and I'm not sure if it is causing your issue, but it's more complicated than it needs to be, and is doing manually what the NDI plugin already does.

I'd suggest looking at the NDI plugin, just connecting both of your PCs to your gigabit switch, and going from there.

Make sure you are using Cat5e or Cat 6 Ethernet cables as well, both support Gigabit. Cat 5 only supports 100Mbps, you can check your link speed in Windows to see if Gigabit is working

As you can see on this laptop I only have 100 Mbps because I am using Cat 5 cables. 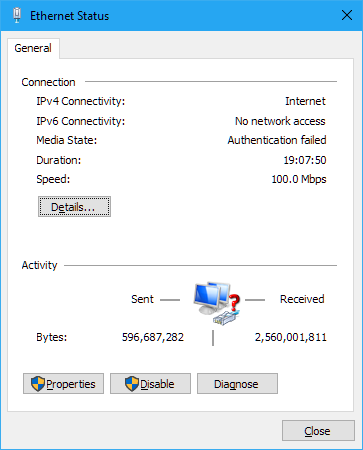 Thank you a bunch guys.

I'm new to this and I want to make my system work properly to not stutter all the time and have me reset OBS continuously.
First of all I will have another CAT6 ethernet cable, as right now I only have one which goes from router to the main PC.
Secondly I will look into how to set up the NDI connection and try like that and see if I still get this issue.
As I said before the current connect seems to run flawlessly, the only problem being that my bitrate goes to 0kb/s and it doesn't go back up, so I need to reset the OBS on gaming pc.

Also, I forgot to mention, right now I'm using an RTMP server to connect both PCs and have the streaming PC capture gaming PC's activity.
Will I still need this RTMP server for NDI?

Thank you, much appreciated!

Bitrate going to zero and never recovering is kind of a major issue, and I just can't tell if that is somehow related to you achieving your goal using custom ffmpeg output. I do know that I routinely stream 3-4 hours with a 3 PC setup using NDI over gigabit ethernet, and while we do sometimes experience technical problems, the one you describe has not been among them. NDI will be worth it for you, I think. If the same thing happens with NDI, then the problem is either with the gaming PC or on your local network.
E

Thanks a lot again bro, I've finally got my system up and running on NDI and it works perfectly.
So much easier and barely CPU and GPU usage.
Also, I've moved webcam from gaming PC where I previously had it plugged in to streaming PC, which helped a lot with the gaming performance as well.

May your soul be blessed!