I guess I'll try my best to spell out what I know., my problem is as follows:

I have OBS Studio set to output 60fps, my capture card (LGX) I usually set to match or highest FPS with the resolution to match what the console is outputting. Though, for some reason, It will not capture my PS2 via the Component leads provided at the source input FPS. In RECentral and OBS, it picks the input up at 720x576i50 and allows me to see whats going on, but will not go to 50fps. I have a few things to explain and It may take a little, however I think explaining here will help greatly to bring the problem. It should be noted that RECentral will not allow me to change the input properties at all, of which im using the latest as of the date of this thread.

SETUP 2 - RECentral/OBS Component (PS3)
Due to HDCP, they supply a Component lead so that you can stream PS3. Again, I can set the FPS to whichever I feel, input signal comes through at 1080p60, which changes depending on the game. (Unlike the X360, The resolution has to be set per game) 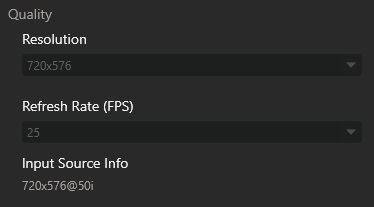 As you can see, the input source is 720x576@50i as the PS2 outputs at this on ypbpr, RGB does not work. The refresh rate however is stuck at 25, and nothing can be modified. A few things have changed in updates and im slightly concerned, as a reddit post that had a driver than eliminated this issue has been removed and I struggle to now find it. As a note, I use to be able to set OBS to output at 50fps and the capture card would do the same, but now, even at 50 or any other output FPS, it sticks at 25.


It is a hindrance to streaming as I jump from PC or an HDMI console to my Component frequently, and should I decide to stream PS2, it used to require dropping my output to 50 and restarting, but even now I'm unable to that as it has locked itself to 25. I have my device plugged into USB3.0 as suggested and run everything on maximum performance as far as I know.

If there is anything else I can provide please let me know. It has been noted my streaming activity has declined and my frustration after looking around for a long while has decided to take its toll, almost making me believe that buying this product was a mistake. It would be fantastic if any AM users out there also have this issue, or even have a fix for this.

[edit]
Found the reddit post that has the driver that apparently works. I have tried rolling back mine a few times but nothing changes.
Reddit Link