Summary
Alone, this is a program that connects to Twitch chat rooms with the required user credentials just as any other IRC client would. It also allows for chatting through the console from the bot. Though, seeing as that would not be efficient, there are hooks in the program that allow for building plugins to automate tasks.

Details
It takes some knowledge of the programming language C# upon which this bot is build off of. It also requires a basic understanding of the IRC protocol for use of commands such as how to send messages down the pipeline. IRC information in detail can be found here: http://www.faqs.org/rfcs/rfc2812.html. This chat bot is built using .NET Core meaning it is compatible with Linux distros (not tested, just conjecture). 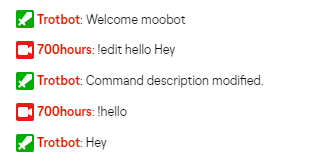 There is a Github wiki page available that explains a little about the 1.2 update and what's changed.
Reactions: @bronardgodines and gatekeeper1122

Join the discussion Get support